Before anyone asks, yes I am still working on the Colecovision. This one just happened to show up, so I figured I'd take a crack at this one while I'm still messing with the Colecovision and other odds and ends.

After a really, really long delay the Mattel Intellivision system I ordered ages ago finally turned up late last week! The Intellivision (Wikipedia HERE) was Mattel's foray in the home video game market, launched in 1979. The console had several iterations mostly featuring cost reductions, but this unit is an original Model 1 console. While Mattel would put up a good effort against Atari and Coleco (an Magnavox, I suppose), Mattel Electronics was hit by two disasters that ultimately did them in- the commercial failure of the Mattel Aquarius and the infamous video game crash of 1983.

While it's primary competitor was the Atari 2600, design-wise it's much closer to the Colecovision than anything else. 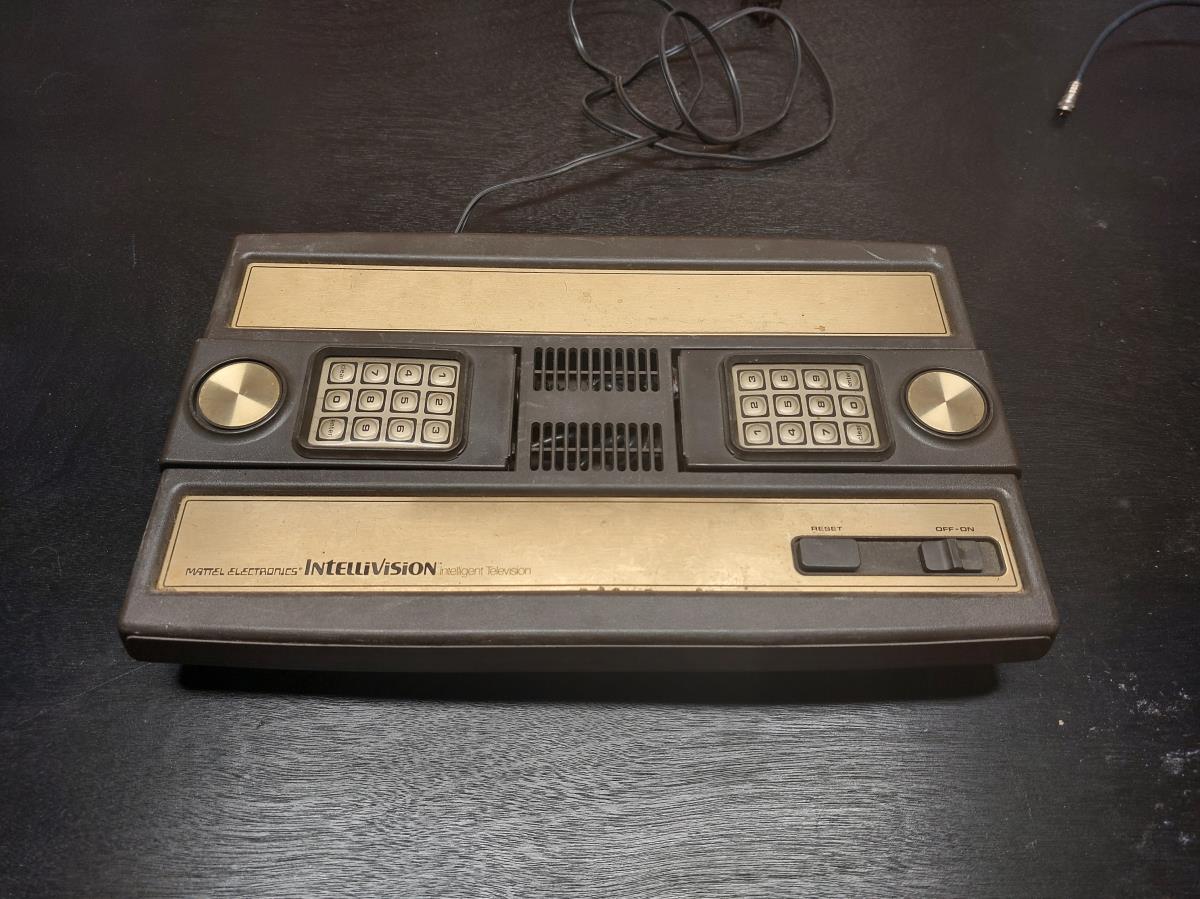 Much like the Colecovision, the Intellivision also has a numeric keypad and what I'm going to refer to as a "directional pad" though that's being generous. While it does "function" like a modern directional pad as we'd understand it today, it feels like pushing on a "rocker" style light switch. It's also recessed somewhat, so I can only imagine how much junk is inside of these, as the "dial" pushes down and in to input directions. It also has four "shoulder" buttons on either side of the controller, two more than the Colecovision, but much smaller. 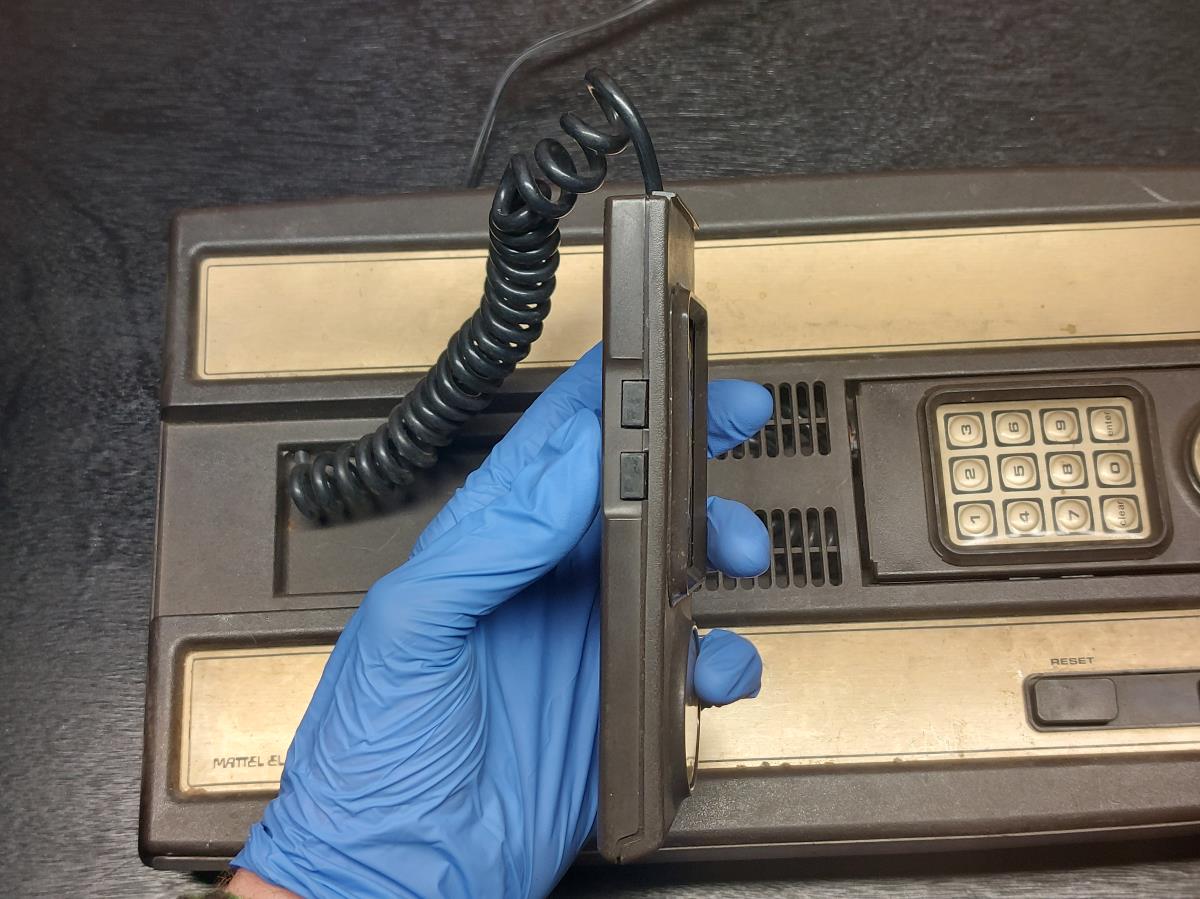 The controllers themselves are extremely thin- not much going on inside I would imagine. The cutout on the back is intended to help with the cable management. Unlike the Colecovision, the controllers are hard-wired, and there's even less space on the system for cable storage than on the Colecovision. Now for the bad news- it dosn't work. Or, I can't get anything out of it just yet.

It's also got some cable damage to the second controller, but I'm confident this is an easy fix. Another oddity- the cartridges plug into the side of the console, rather than the top with pretty much everything else. Here's a cartridge in the slot there: 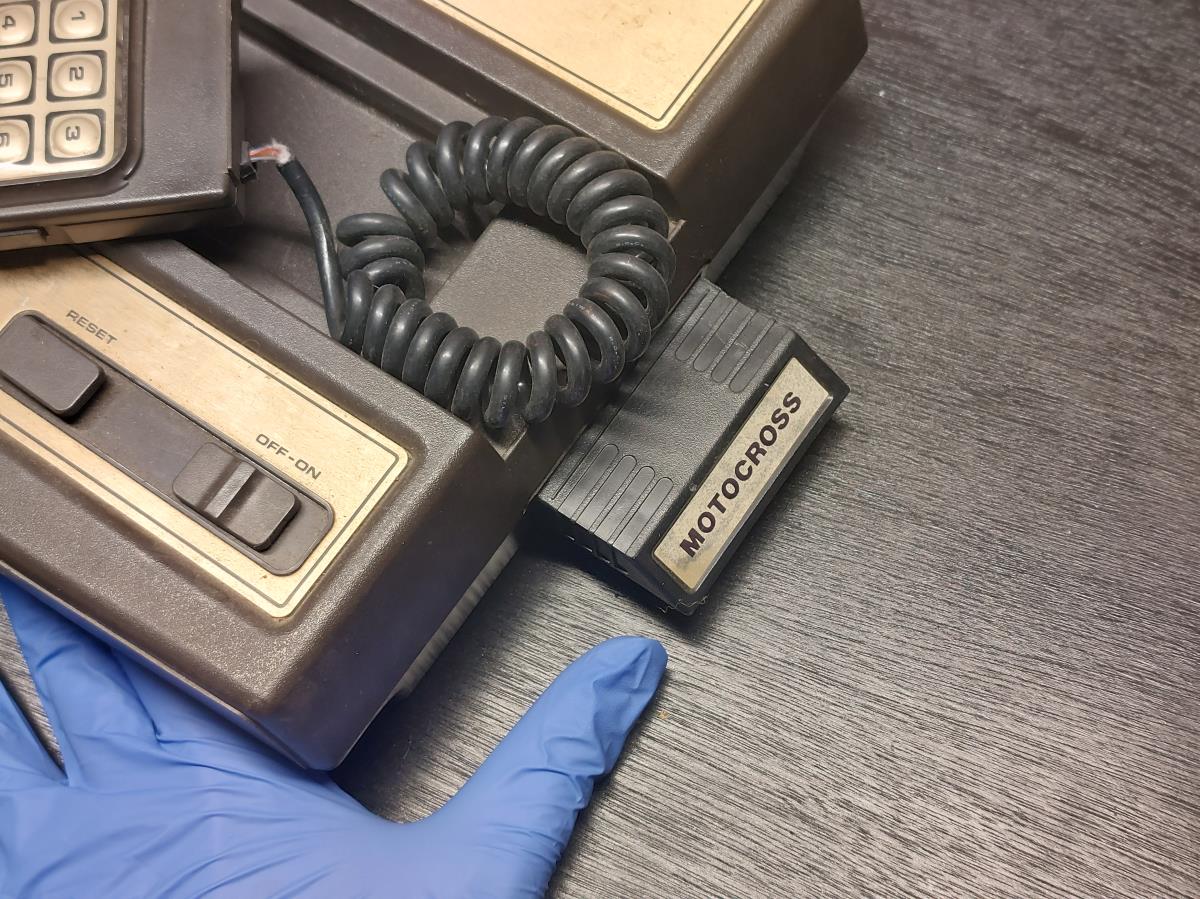 Under the hood: there's a power supply and transformer there (interesting, as the others from this generation pretty much all use wall-wart style transformers) and a lot of RF shielding. Everything is held together with lots of screws. Very dusty, with a loose overlay for the game "Snafu" stuck in there. The motherboard is in this RF shield sandwich that's held together with a lot of solder. My initial efforts to melt the old solder to pry the cage loose has been unsuccessful- I'm not sure what I'll need exactly to get this one loose- assuming it needs that. Preliminary test has it generating a video signal, but just a black screen. I may have to look inside, it appears the chips are socketed, and they could be loose. Or maybe that's just wishful thinking on my part- I hope this is an easy fix! This adds a computer voice and a couple sound effects to the few games that are supported. We've got both Bomb Squad and B-17 Bomber to test out on it when the main console is running. 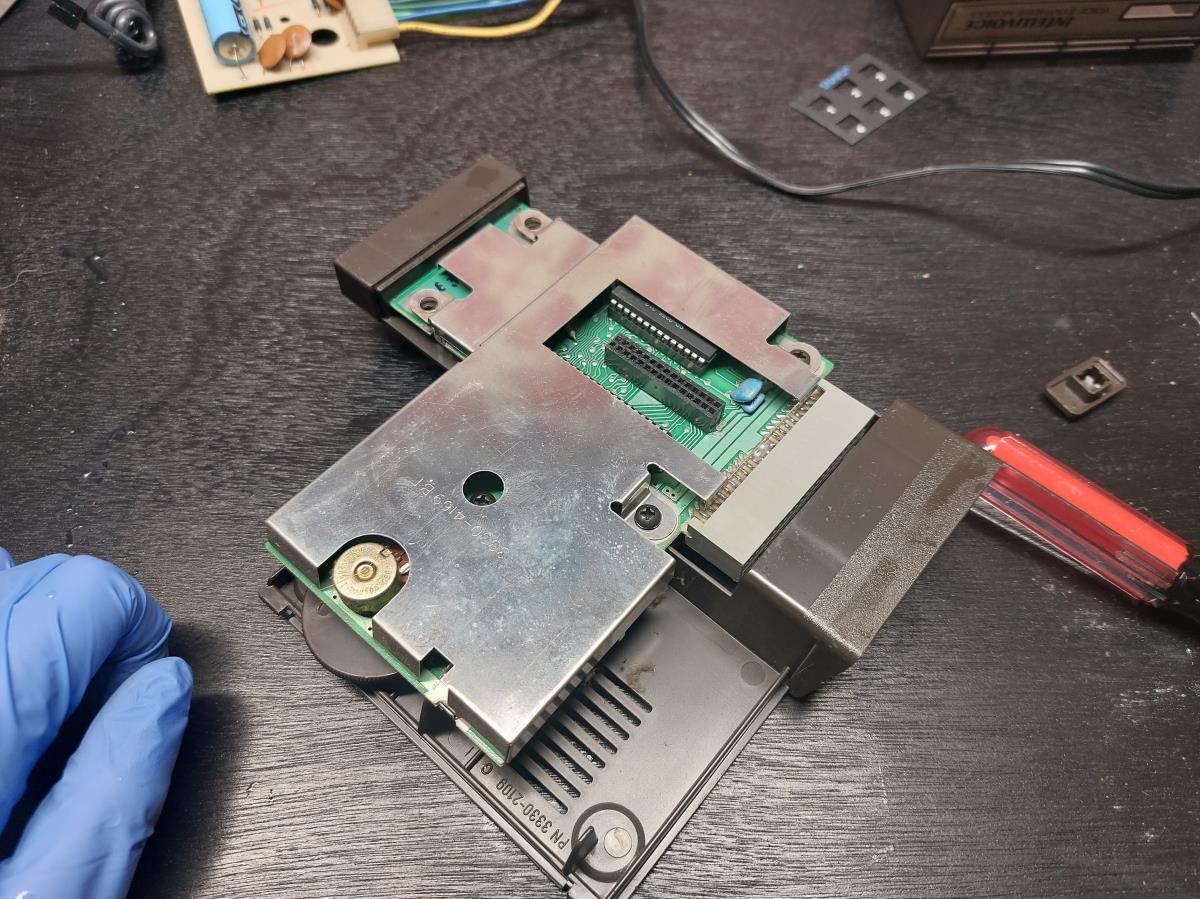 The wheel is the volume control knob. The unit feeds the audio through to the console so it comes out of the TV. On top is some sort of header that isn't used for anything as far as I can tell. Mattel have it blocked off with plastic on the top cover. I wonder what they would have put on top there...

The RF shield on the voice module is only screwed together, so here's all the parts underneath. Not too much going on. Curiously, it also had this rattling around inside of it. It's hard like a rock, and not water soluble. I think it's a little quartz crystal, but where it came from and why it was inside this unit is a mystery to me. 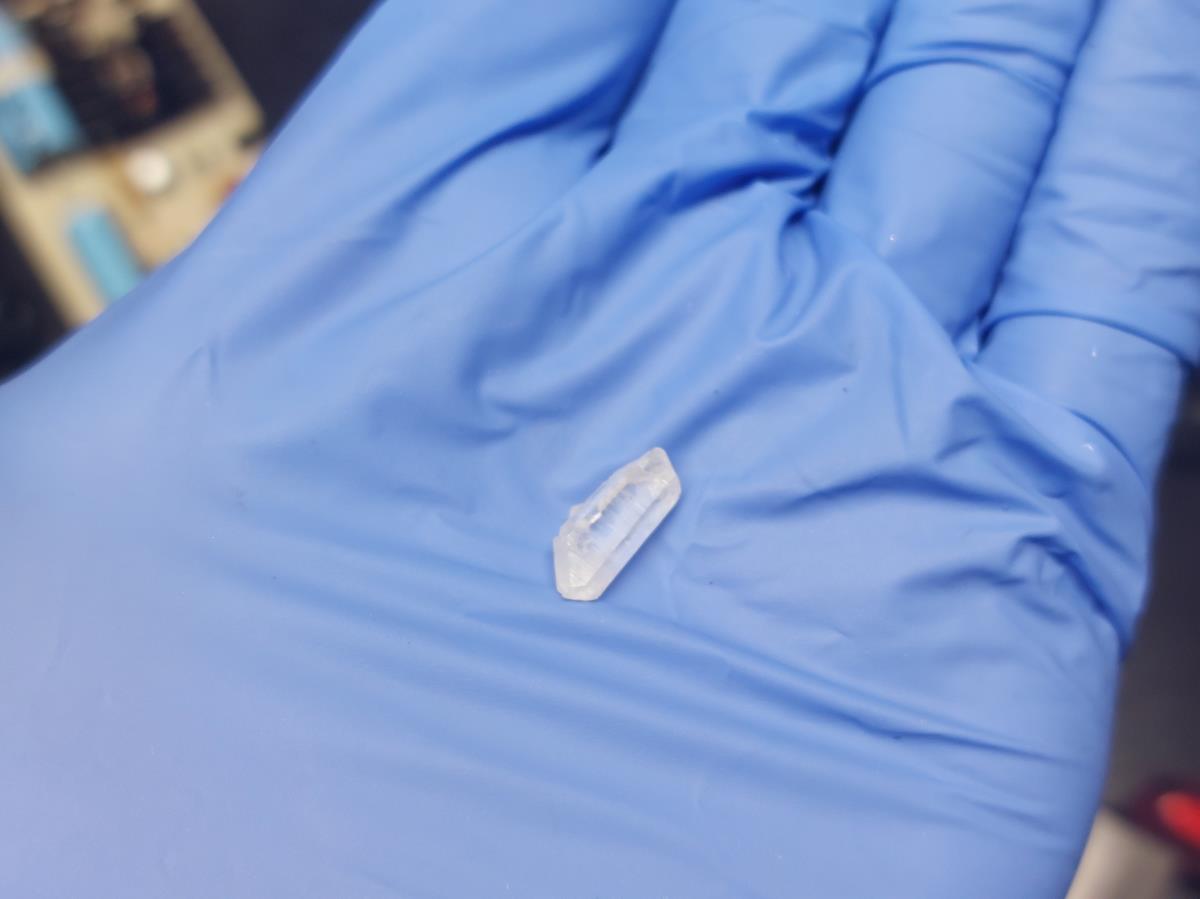