When the Tech Lounge closed downtown, I attended their liquidation sale, and bought (sight unseen) a box labeled "UNISONIC CONSOLE" and it's been sitting in my "to do" pile ever since. Unisonic made a lot of pong consoles back in the day, some more ambitious than others, and this one is neat in that it supports a light gun that looks like a comically small hunting rifle. It's immensely dirty (I fear something might have been living inside of it), and needs some repairs before it'll ever run. But at a glance it appears that all the parts are here, so a deep clean and repair is definitely in order! 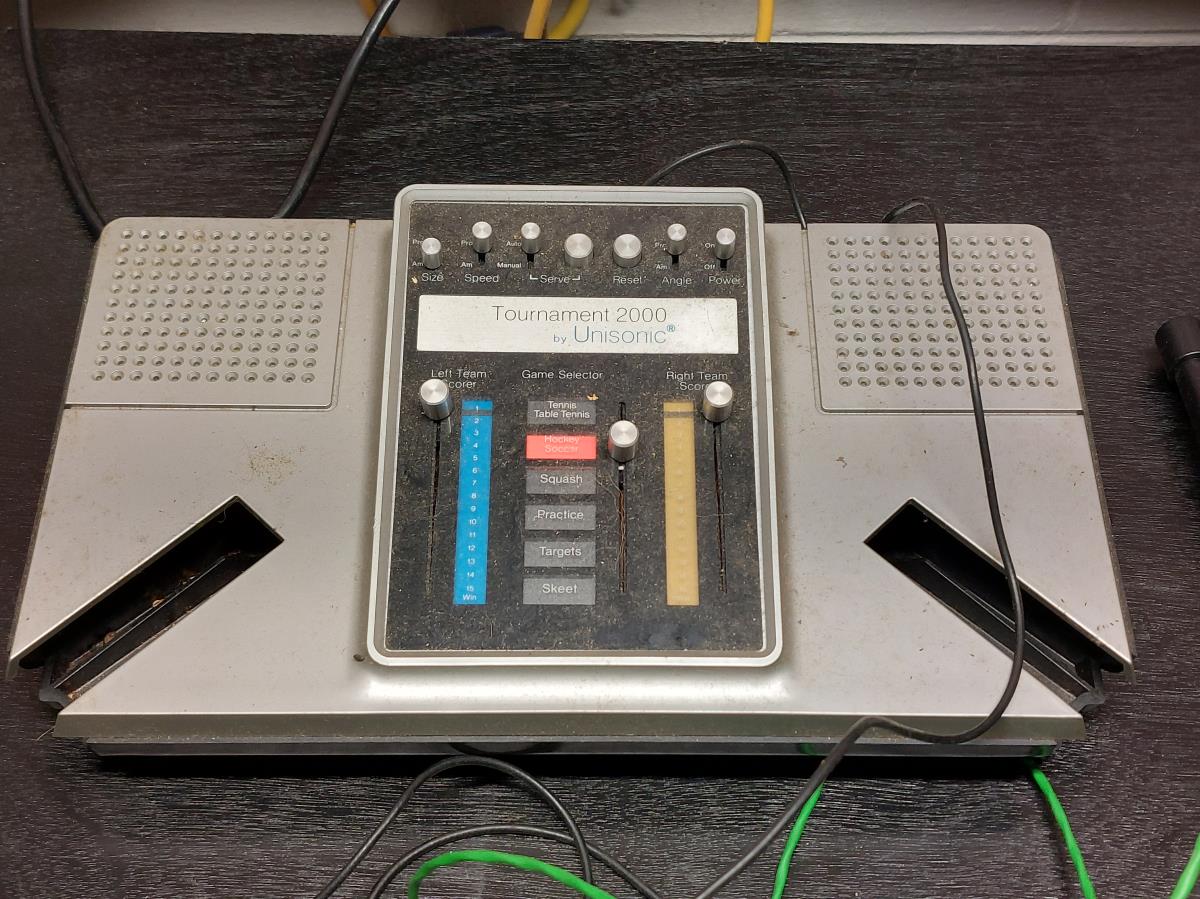 This console is the direct precursor to the Unisonic Olympian 2600, which we also have in working order. The Olympian is definitely bigger, heavier, and better built overall, though both machines have some great retro styling. 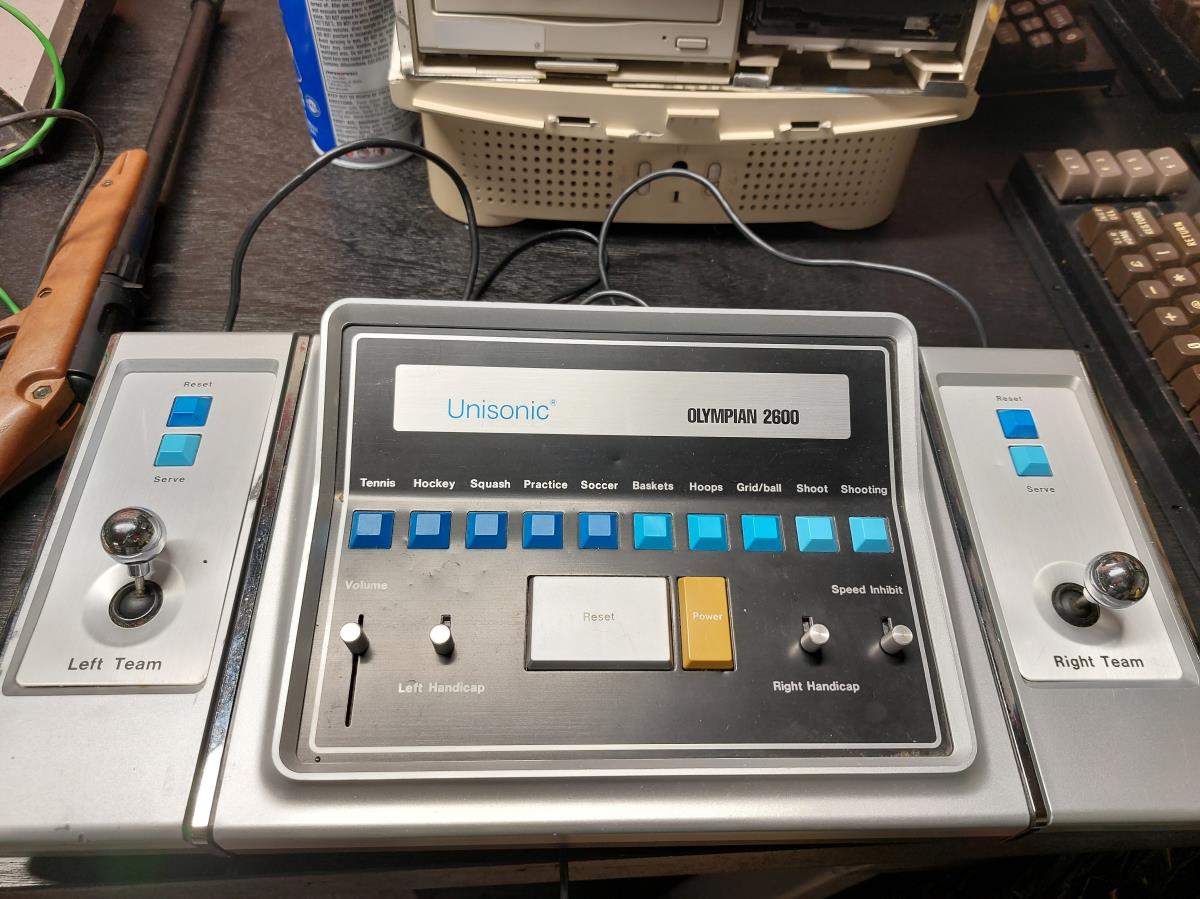 Wikipedia article about the whole Unisonic family HERE. They also have a picture of the Tournament 2000 in it's prime- so that's how this one will look when it's finally done.

So first, the most interesting part of this console- the light gun. While the Tournament 2000 isn't the first (nor last) pong console to feature a light gun, I've never seen one quite like this. The gun itself is a sturdier plastic than the console itself, and plugs into the console via a 5-pin DIN socket in the back- same plug you'd find on an AT keyboard. Kinda strange! Even more strange is the odd plastic bipod thing. It's detachable, and does allow the gun to "stand up" as seen in the photo above, but I can't imagine it would be useful for storing it. Likewise, given the Unisonic's extremely limited computing power, I can't imagine how a stand like this would assist in playing the two games the console includes for it. Here's a close up of the sticker on the gun itself. I thought it would have been a warning of some nature, but it's not. I know this came with the Unisonic, as it's depicted in the manual: 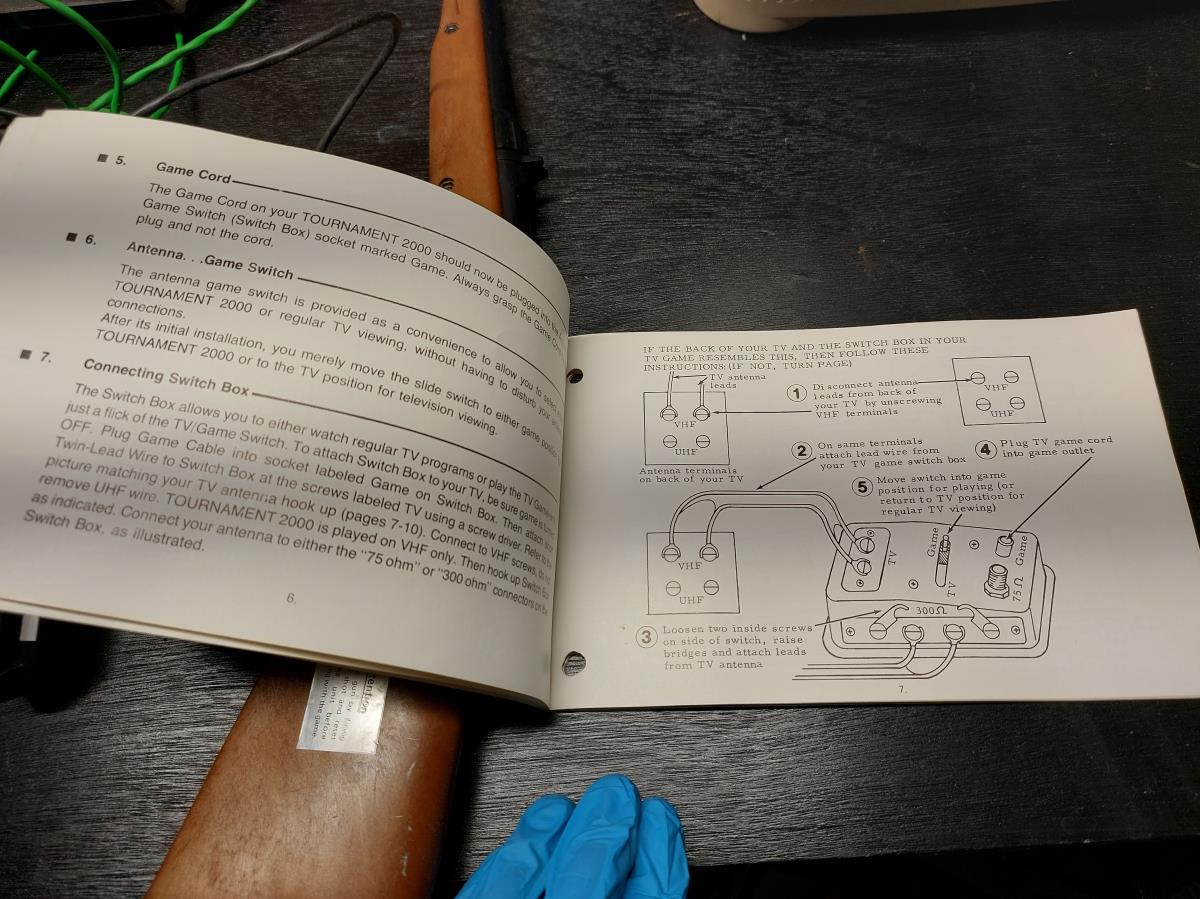 The controllers are very simple slider controls- perfect for playing pong, but not much else. These are interesting in that they can be plugged in either via the green cords, or unplugged and attached directly to the console in those front slots. 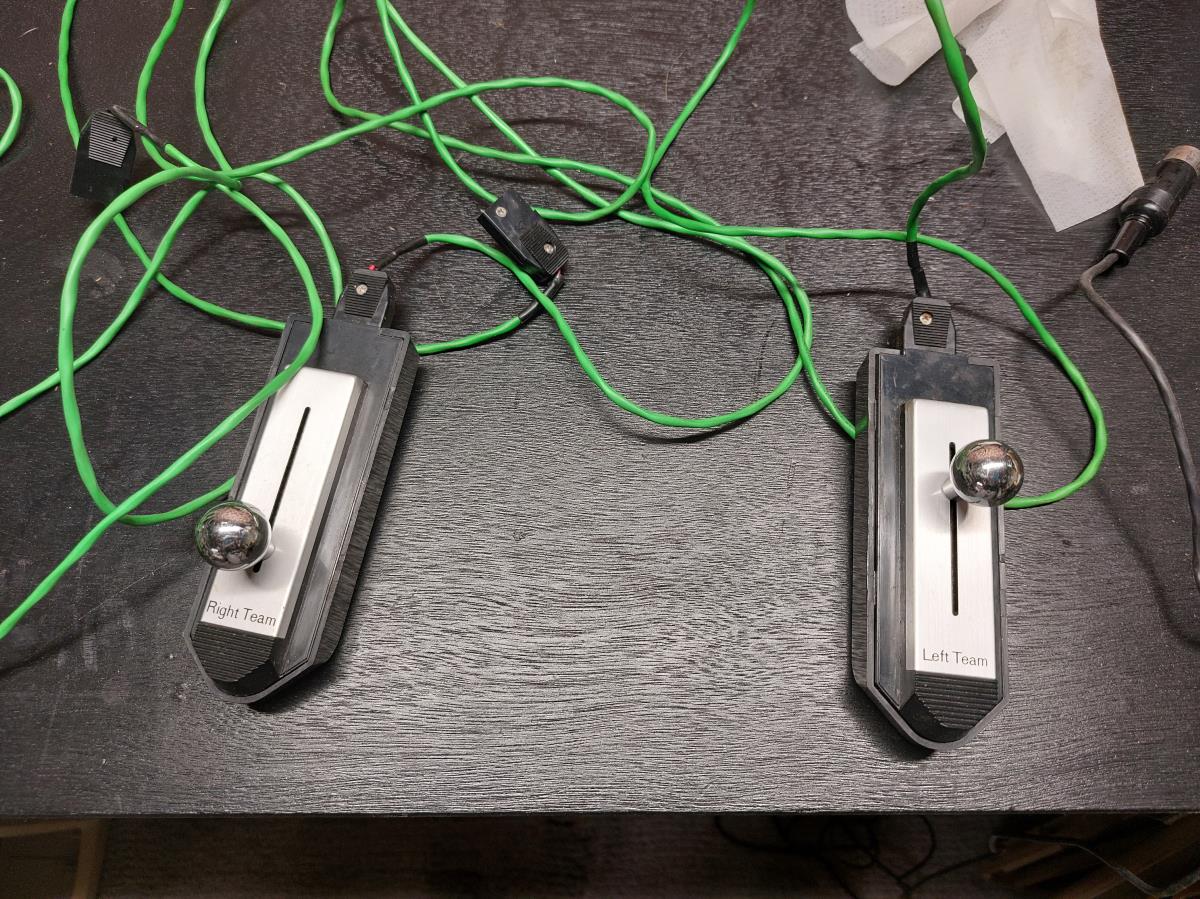 Now for the scary part. All the little round things appear to be shells for seeds of some sort, and lots of them. My guess is that at some point a little critter found this console and the open holes where the controllers had been that opened up into the empty space inside and thought "this is great, I'll be like an animal on Mr. Rogers neighborhood!" and lived here for a while. 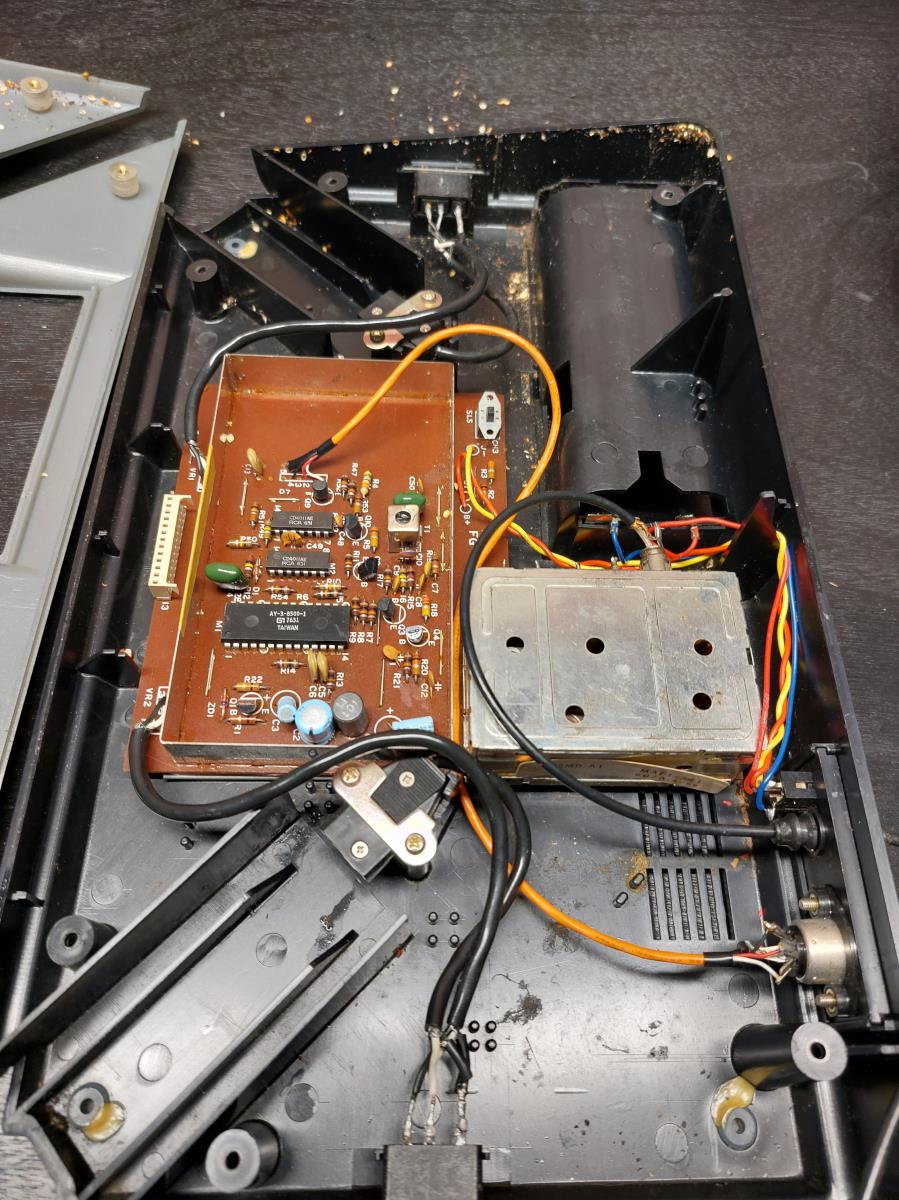 The plastic around the battery compartment and some of the wires have some nibbles, but the board's RF shielding kept most of the electronics safe and "kinda" clean. Thankfully this all lifted out without any trouble so the plastic case could go directly into the big sink.

One last tidbit, here's the control/scoring module. It uses a physical scoring slider, so it is somewhat more "primitive" than the later Olympian 2600 or even it's contemporaries like the Magnavox Odyssey series. It is neat that it's one big module that just slots into a header on the board. 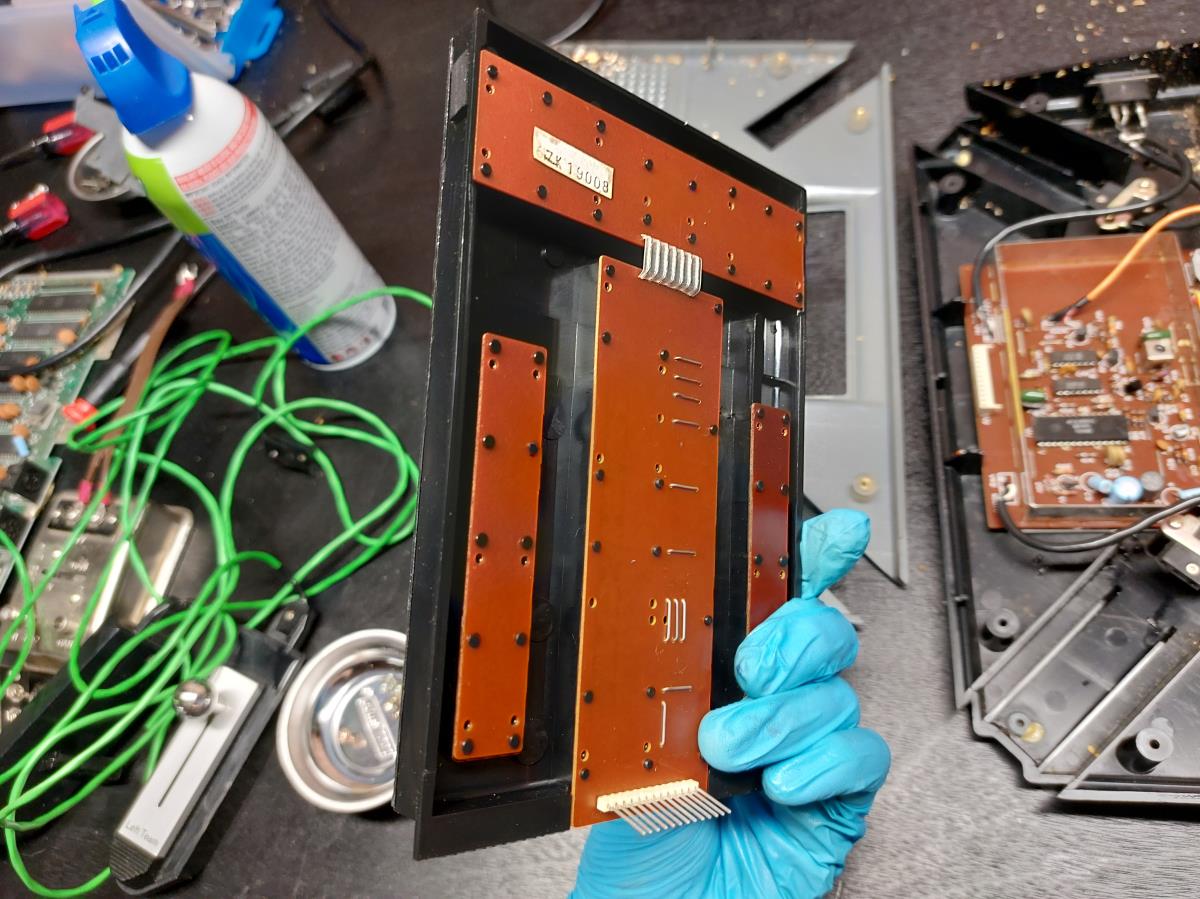 I'm going to continue to cleanup, and hopefully have this thing working very soon. I can't see any reason that it won't run, and I'm eager to see how the light gun performs. More to follow!

Super cool! I love the old consoles with the physical score selectors. It seems to add a personal touch. I can only imagine how many siblings tried to sneak some extra points or remove points in their favor. I know I would have

You got a mouse house! So I've done a pseudo-mod to this console. When I was dismantling it, I discovered that the old video cable (on top of being chewed on and beat up) was sealed into the console with a blob of melted plastic, so the only way to get it (and by extension the main board) out of the unit was to cut it. The cable was in such bad shape, I elected to just toss it and replace it with a spare RCA cable I had lying around. However, rather than try and feed it through the little opening at the back (or cutting/splicing the cable to do that), I fed the RCA cable in through the battery compartment. Pretty much everything the batteries had been touching had corroded away and basically fell out when I was cleaning the unit, so this space was going to be empty regardless- but now it'll make a neat place to store the video cable. It's rather convenient that the output on the RF modulator is right there facing the compartment too. Jasper said:
You got a mouse house! 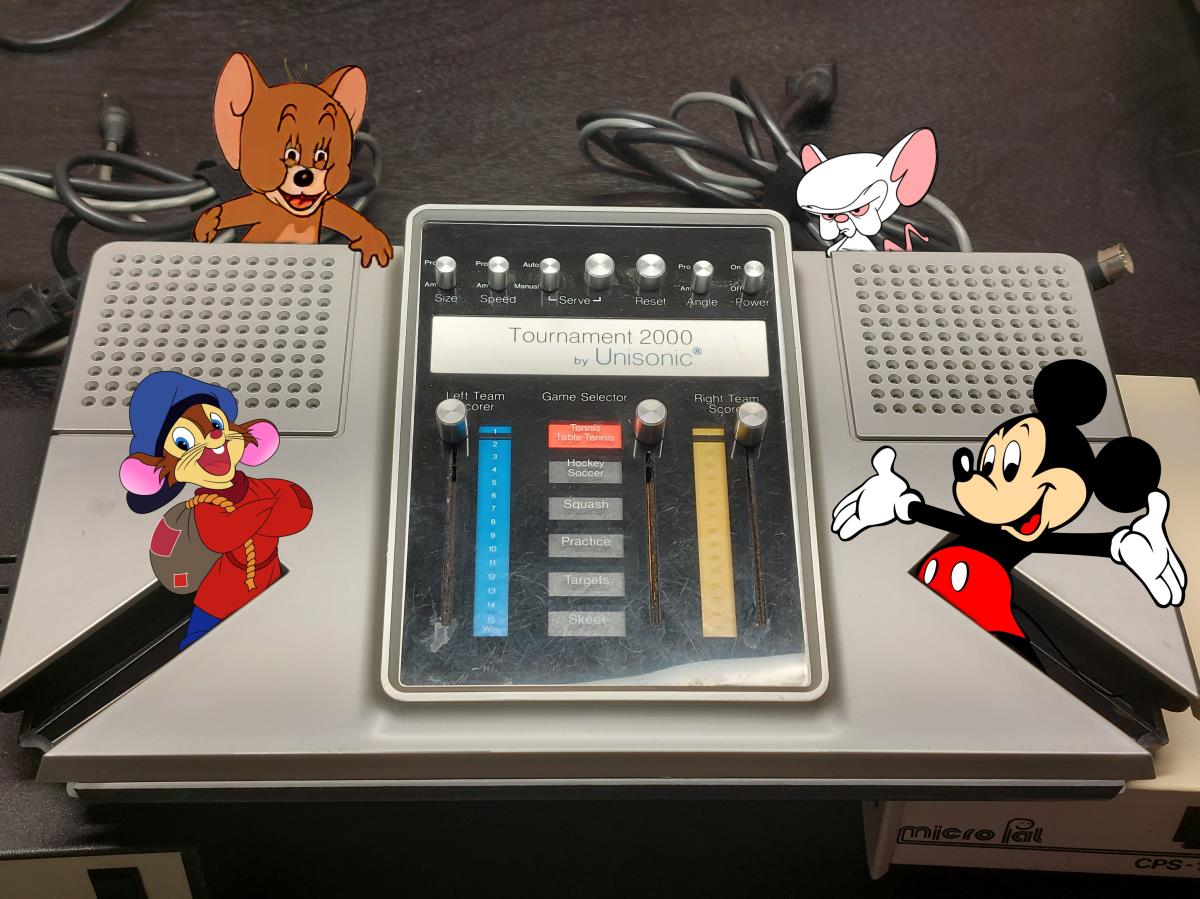 Alright, last week I had time to work on the Unisonic again, this time buttoning it all back up and (finally) testing it. It still runs! Looks pretty good. Controller two (left side, strangely) is a little flaky at times, but I think I can fix that. 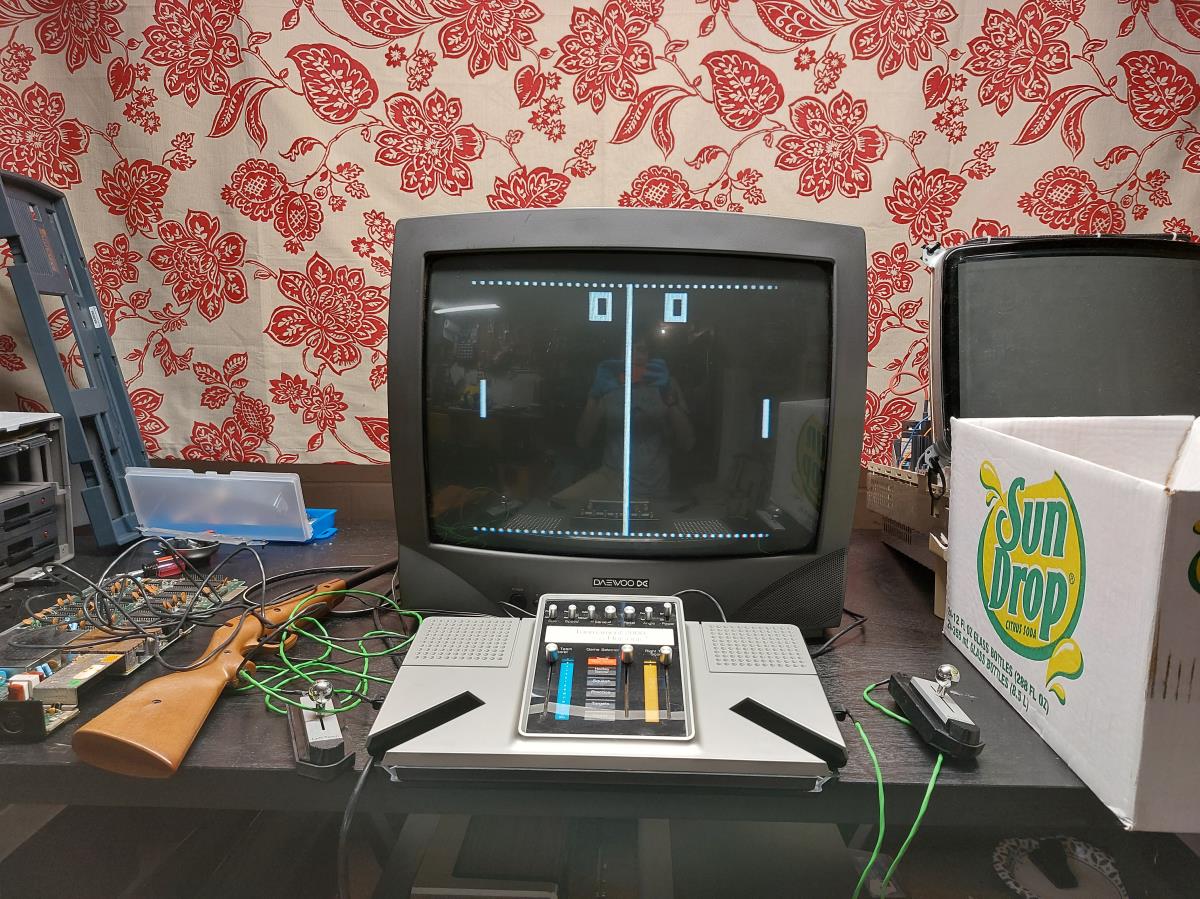 Squash, Practice (practice is only for the right controller): 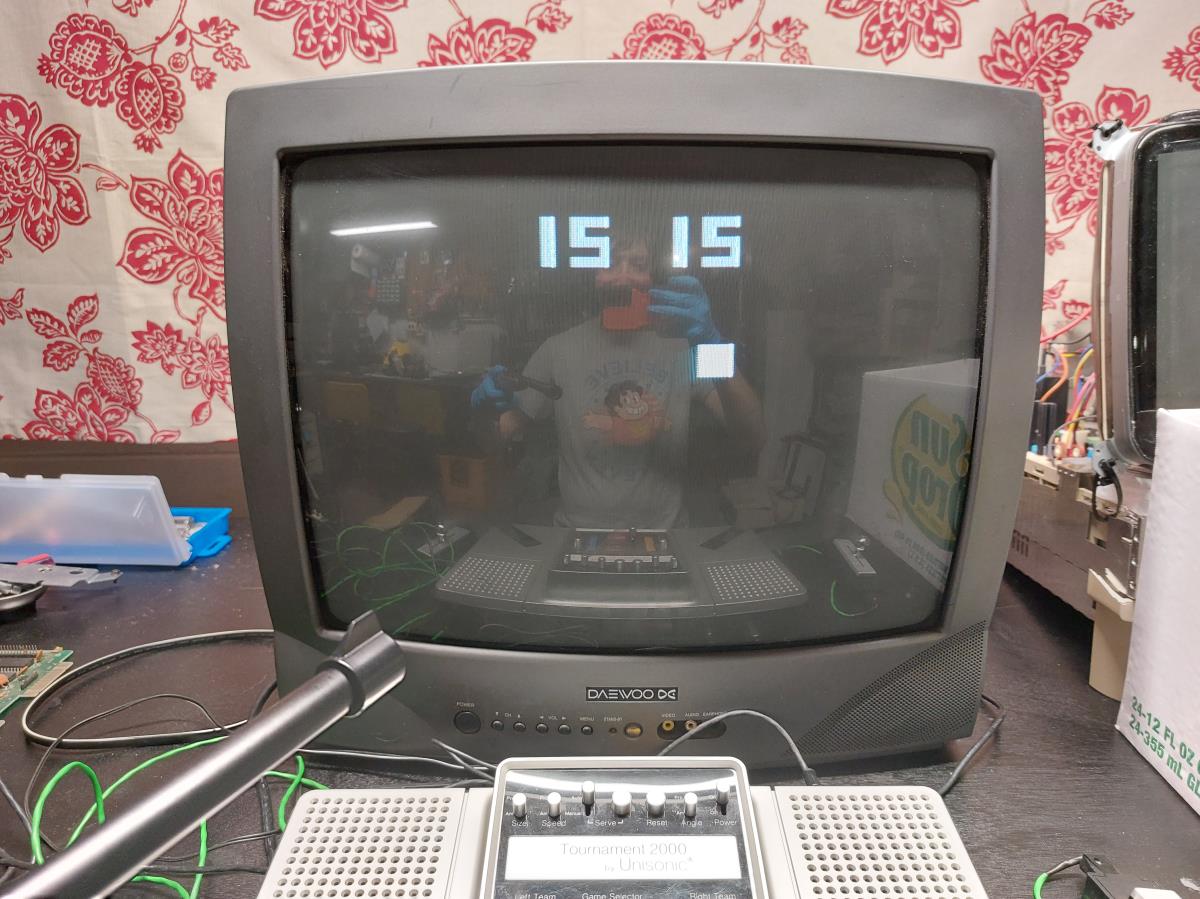 So, having cleaned it all up and put it all back together, it's a neat system with a rather cool history. That said, it's inferior to the Unisonic Olympian 2600 that followed (that we also have in the collection) in almost every way. The Olympian has more games, better controls, and a better form factor- this one has a lot of extraneous "stuff" that goes with it that could be easily lost or broken. The one thing the Tournament 2000 has that the Olympian 2600 doesn't is the light gun, but the game itself doesn't register very accurately, and I get the feeling that even if it did, most would get bored of it in a hurry, especially compared to the two-player shooting game on the Olympian 2600. So if you're shopping for a Pong console, the Olympian 2600 is still the best one around in my opinion. Not saying this one is bad, but it definitely lives in the shadow of it's successor.

I'll have this one at the show on October 1st for everyone who wants to give it a whirl!