No long ago, one of the club members here traded me this oddball machine. This contraption is a Canon VP 3000 word processor, a hybrid halfway between a computer and typewriter. Unfortunately, there's almost no documentation about this machine anywhere, so getting it up and running will be easier said then done.

It is a striking piece of machinery, and I'm excited to see what the future yet holds for it! 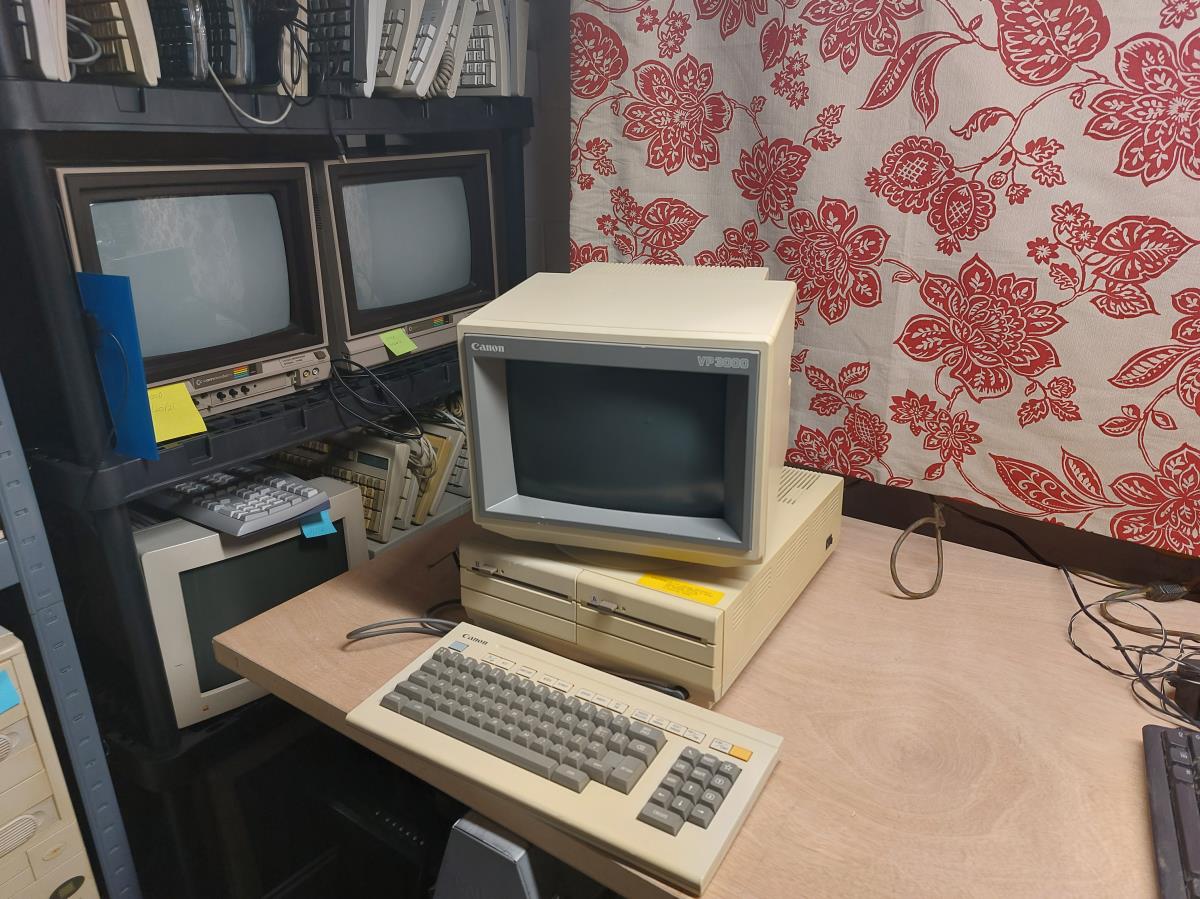 It has a matching printer too! It's kinda big. 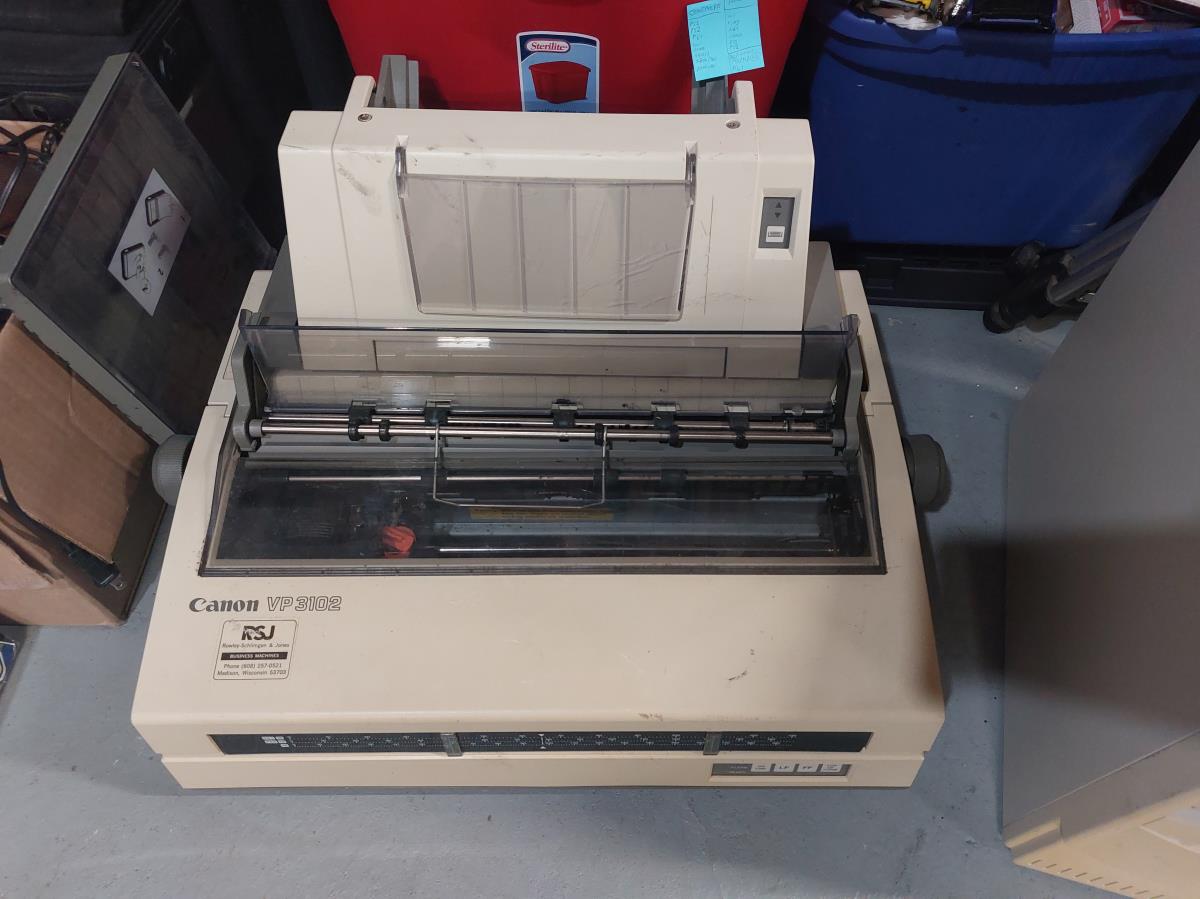 Floppy disk for scale. Easily in the top 5 heaviest things in the shop right now! 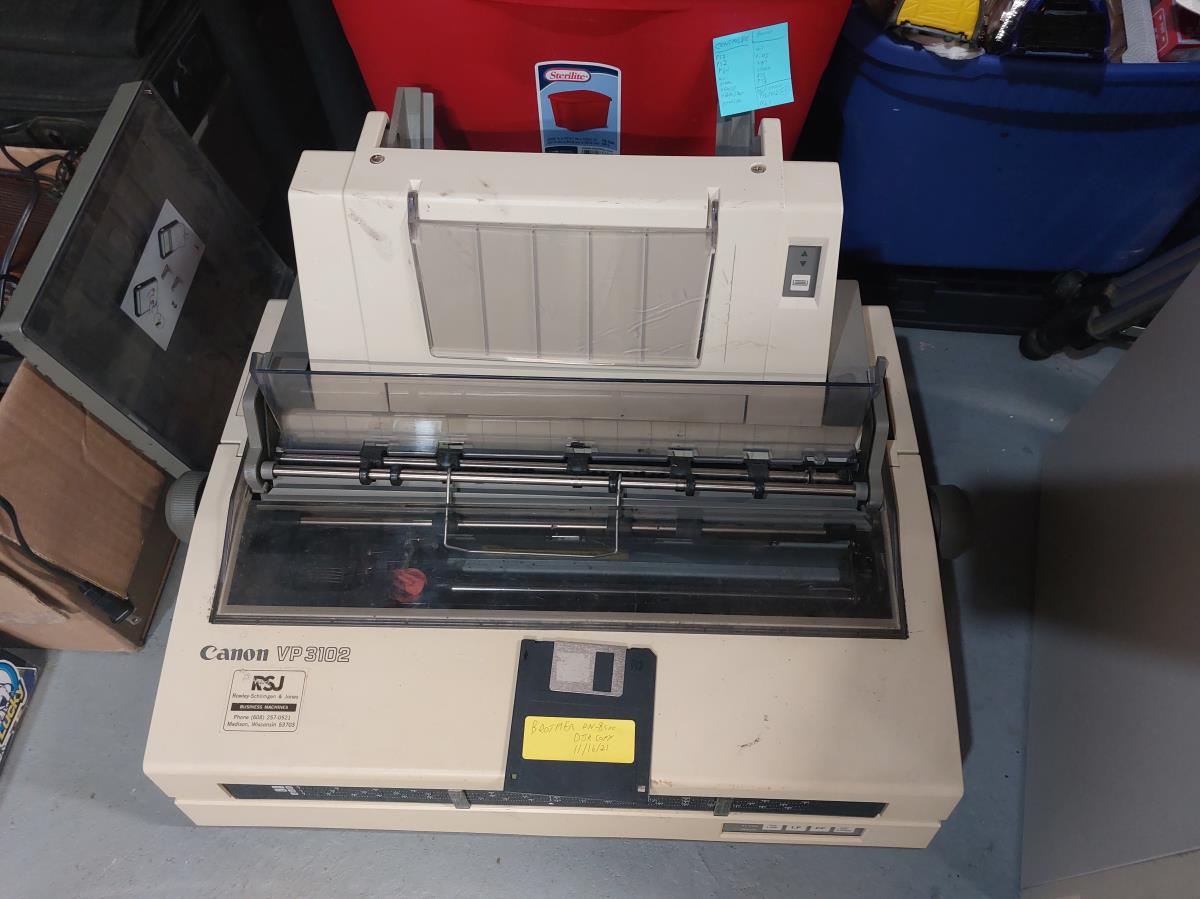 Here's a look at the keyboard. Not quite a "standard" arrangement. It has an odd round mini-DIN connector as well. 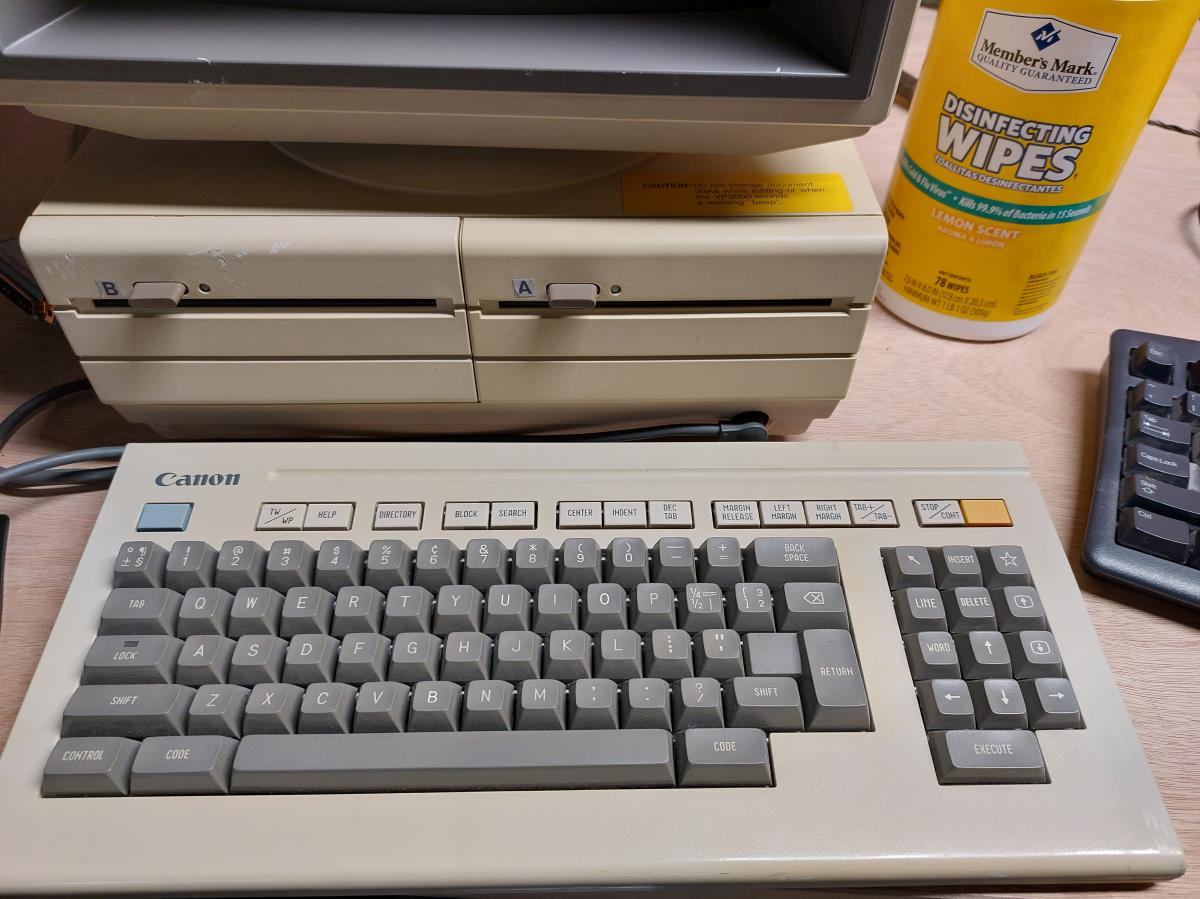 To date I've had zero luck finding anything on this machine. I don't mean just the software for it, I mean anything on it. It's like a ghost or something.

I did find the source code package for the Canon Cat (HERE), another disk-based word processor from Canon. Whether there's anything between the two that is compatible is a shot in the dark. The Cat is itself an extremely rare proprietary machine in it's own right, but it's wild to think this thing is even more rare and strange by comparison.

Really highlights the importance of software archiving... once it's gone missing, it's mighty hard to get back.

So I have a new lead I'm chasing now. Bit of a stretch, but it's better than the nothing I've had to work with so far.

The question is simple- if the software for the Canon VP 3000 is nowhere to be found, what else might be compatible? Logically, some other word processors by Canon might share enough code and hardware to make this work. The next one I'm focusing down is the StarWriter 80.

The StarWriter 80 is an 80 column typewriter replacement that (usually) features a built in Bubble Jet printer and 3.5" floppy disk drive. These were, at least according to what I've found, Canon's most popular word processors from the late 80's through the end of the word processor era in the 90's. Here's a picture of one I pulled from eBay: 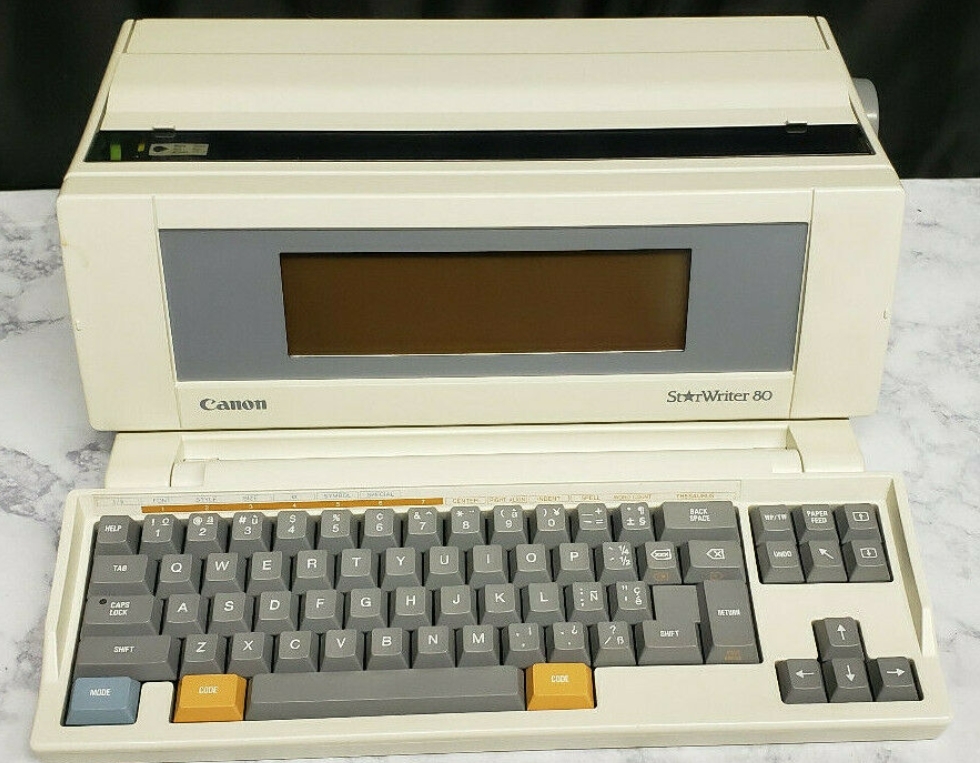 While there are some obvious differences, almost all of the specialty keys are still here, making me wonder if the software might work. The downside, the software on he StarWriter 80 is on a ROM chip, not a disk. If only Canon had been doing that from the beginning...

As of now, I've had no luck finding the software or ROMs for the StarWriter 80 or it's contemporaries. It is possible though that if that information could be found, or even extracted, that it might be able to be given to the VP-3000 in some form. I guess we'll see what the future holds!

Muddying the waters even further, there's also a line of similar machines under the "CanoWord" line, which was sold only in Japan. Might be some leads among the group of machines there, though I can't read the language to be sure either way.

Ran across something completely by accident (thanks Tumblr!)- but there's precious little information on it beyond the photo and the metadata. 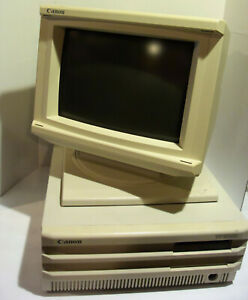 Unfortunately, this is the biggest and highest quality image out there that I could find. A search for "Canon VP 5000" pulls this image up in the search, and it seems it was listed on eBay sometime in 2020. There are two different listing ID's between Bing and Google search, which makes me think it was listed at least twice. Beyond that though, there's no solid information to go on.

That said, what the picture reveals is mighty encouraging- this unit has (from the look of it) two floppy disk drives of the 3.5" variety, a keyboard jack, and possibly a detachable monitor. The case badges are blurry, but look to match with the VP 3000 we have here in the shop. There was more than just one Canon VP 3000, and from the look of this, there was more than one generation of them.

I'm planning to add a side to the table display at VCFMW asking for any information about the VP 3000. I like to think I'll run into someone there who might be able to, at the very least, fill in some of the holes about this oddball product, and bring it's history to light. Fingers crossed!

Hot on it's heels, I've found the Canon VP 1000! Thanks Microsoft Photo Search! 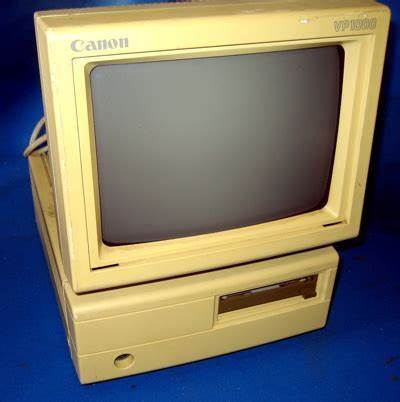 This looks much closer to the VP 3000 in styling, but with only one disk drive. Perhaps a different "trim" level? Unfortunately, the site only has this one photo of the unit.

This one (HERE) belongs to "The Freeman PC Museum" in Santa Ana California. I did reach out to them, but their last site update is (from what I can see) is 2007, so I'm doubtful we'll hear back from them.

Still though, this is a big leap in the ongoing hunt for any "real" information on the elusive Canon VP series.
D

Wow, that’s a pretty steep price for one of those. I was just at an estate sale that had a word processor in box (looked NIB) but wanted about a $100 or so. I didn’t think about it too much at the time but saw similar ones on eBay for around $40 used. So it could have been a fair price but I thought it was a bit steep.
You must log in or register to reply here.
Share:
Facebook Twitter Reddit Pinterest Tumblr WhatsApp Email Link
Top