So, not long ago, I ran across an eBay auction for a Macintosh Performa LC-550, an interstitial machine between the compact Macintosh line and the iMac. It's an odd beast for sure, with an unusual form factor and design. I had some eBay credit to burn, so I took a leap on it. Now, as with all things on eBay, you must roll the dice when ordering stuff. While you're almost certain to get the item itself, the condition of the item when you receive it is always up to the carrier. Seasoned sellers know to expect the worst, and package accordingly. Even so, sometimes even the best of efforts isn't quite enough.

Unfortunately for this machine, the dice roll wasn't in my favor. 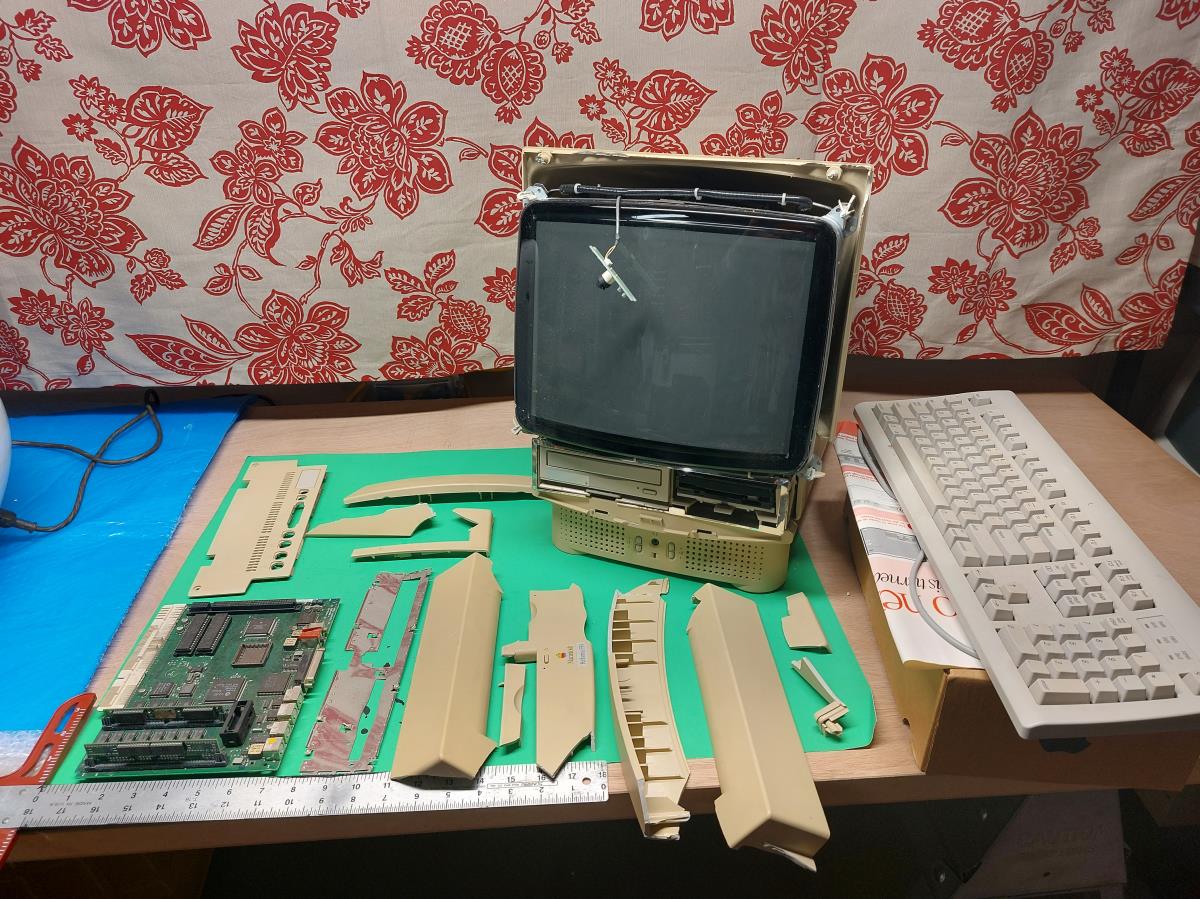 As Dr. Jones Senior once said: As of this writing, I've got 68 pieces pulled out of the box- ranging from the larger pieces pictured to splinters of plastic smaller than a pin head. As the box the unit was shipped in was the original box from Apple with the grab handles open, it's unknown how many of these small bits may have been lost in transit. It's an immensely complicated jigsaw puzzle in which it's entirely likely I don't even have all the pieces. While I'm confident I could "Frankenstein" the parts back together, it's unlikely that the unsightly results would be able to bear the weight of the trinitron picture tube which is just "sitting" there. Miraculously, this wasn't broken in transit- though it was no doubt the weight of the tube that shattered the brittle old casing in the first place. In order to even consider rebuilding this machine, a means to support the tube inside the casing has to be created and implemented- as the case itself can't be opened until the tube is supported well enough to remove it- the whole case comes open not unlike a compact mac where the back slides off. If I try to do that now, I'll either shatter the trinitron tube, the casing, or both. Internally, I expect there will be more damage to the analog board, harness, and possibly more. It seems unlikely that having that heavy piece of glass banging around in there against all those old wires and components would end well- but at this point even accessing them isn't really possible.

The logic board was removed, and during shipping it had been hit hard enough to unseat the logic board, throw the battery, and from appearances at least one chip as well. The board is dirty, but isn't corroded- the battery which was in the box wasn't leaking so that's a slight silver lining. With a cleanup and recap, we should have a working motherboard out of this.

At this stage, I'm not sure what to do. The machine is in an odd state of limbo- it's not "completely" destroyed, but it is very, very badly broken to the point that I'm not sure that it could ever be rebuilt to a condition where it could be part of the show as I'd envisioned. For our proposed "Macintosh evolution" show at the Portage County Library (tentatively planned for Q1 2022) it really does focus on the aesthetic and design changes as the Macintosh series evolved, but if this thing is a mangled mess I don't know if it can stand in- and that's assuming it's not so badly broken in terms of electronics that it would actually run.

But, it's not just another Macintosh- there aren't a lot of these left out there, and it wouldn't feel right to just break this thing down for parts without giving it a good shot at a rebuild. It's all but certain it will never be factory fresh again, but that doesn't necessarily mean that this can't be a very good vintage computer. Maybe.

I'm undecided, so for the time being this is going to be carefully placed into storage. I'm open to ideas as to what we might be able to do with this machine going forward. Many thanks all!
Last edited: Oct 28, 2021

Another picture, the lower chassis did seem to survive better what with the metal RF shielding around the disk drives holding it together- so there is a little bit of the machine that isn't totally destroyed. Jasper said:
Ow! Can you fix it?
Click to expand...

Maybe? It really comes down to whether it's "worth" fixing or if we need to do something else. Something cool will come out of this yet though!

I've heard no word from the seller, so I'm going to see if there's a means to remove the tube on the 550 without breaking it, or the casing around it more. Wish me luck!

I've received word from the seller that they will not be expecting it shipped back to them, so we can move ahead with whatever plans we want to make for this oddball machine.

It's out of the shell! Good news- the tube is intact, and despite a lot of physical damage to the rear case, it looks like it can go back together.
Bad news- the analog board has clearly suffered some pretty significant blows in transit, and a whole array of caps will need replacing.

This renews many of the "is it worth it to fix this machine" questions. I know I would like to make an effort to get this machine reassembled and working, but what exactly that process may look like will require some more thought. Thankfully, this one isn't likely ever going to be in a show, so there's no rush on it.

Likewise, I welcome other's thoughts and opinions on this one. Many thanks! Here's a picture down into the "slots" with the weird Apple edge connectors. All appear to be intact. 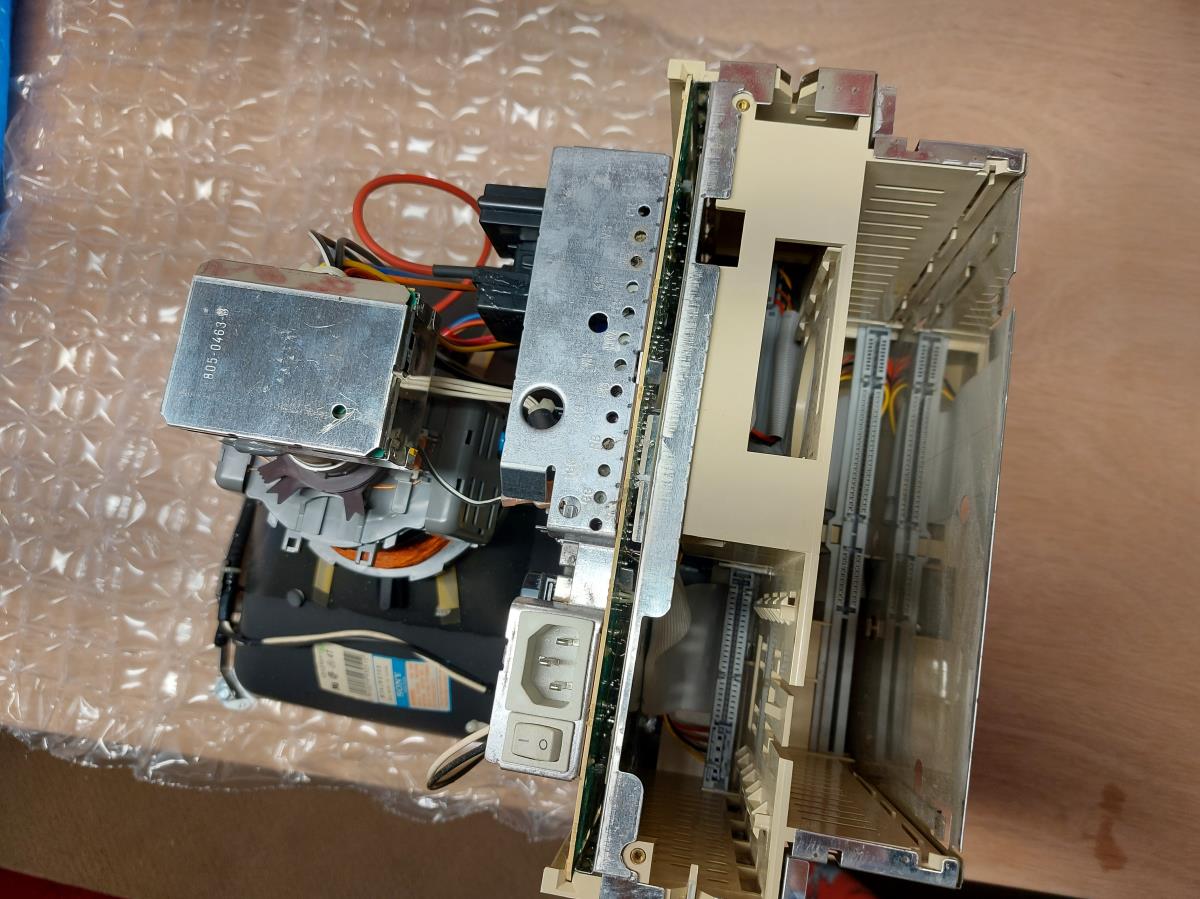 A look at some of the caps on the analog board that look a little rougher. Thoughts on these? I'm leery to just "fire it up" if these might explode or something, but I don't necessarily want to go to the trouble of replacing things that aren't broken just for a test run. So, here are the larger parts of this jigsaw puzzle. My game plan is to fit the bigger "chunks" together, and then see ho many of the smaller pieces I can manage. Fingers crossed. 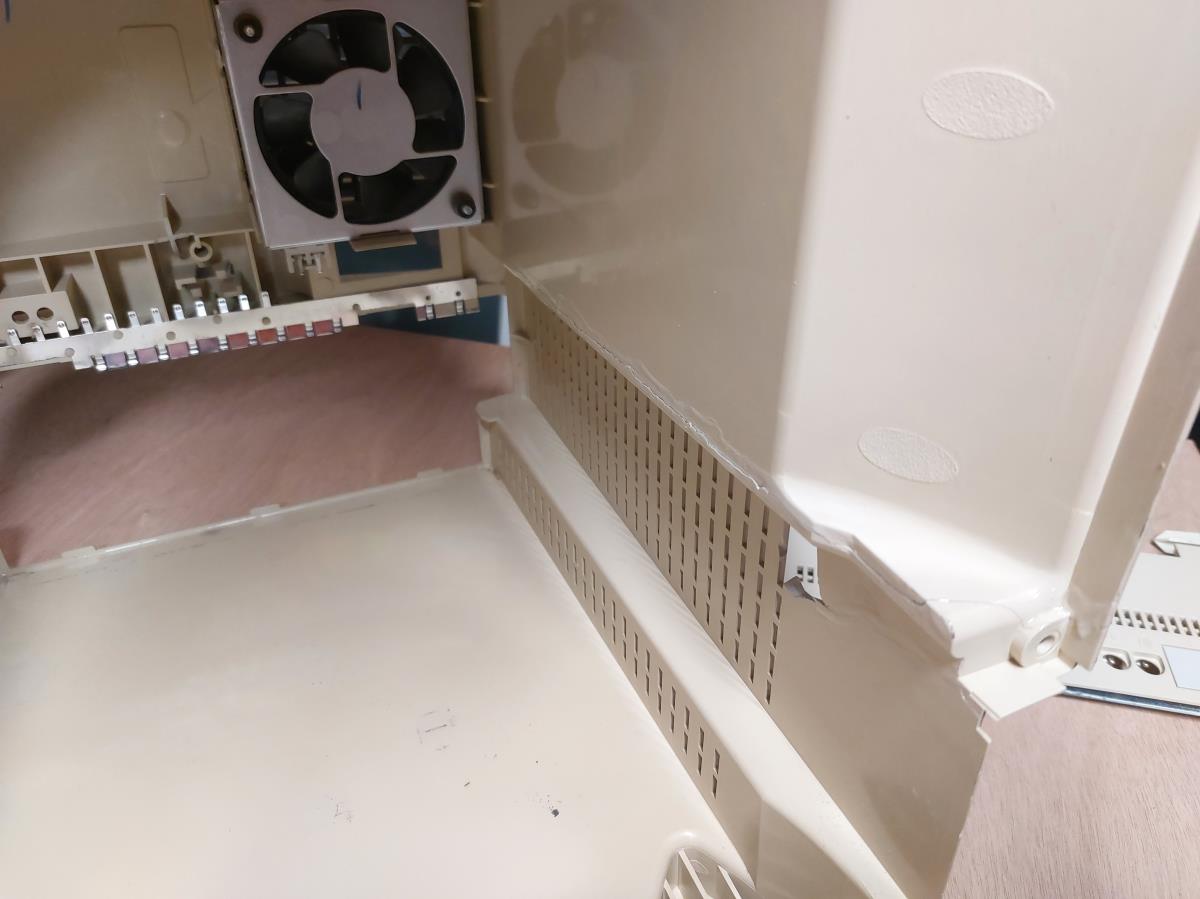 I'm not looking forward to fitting smaller pieces, but things are coming together. 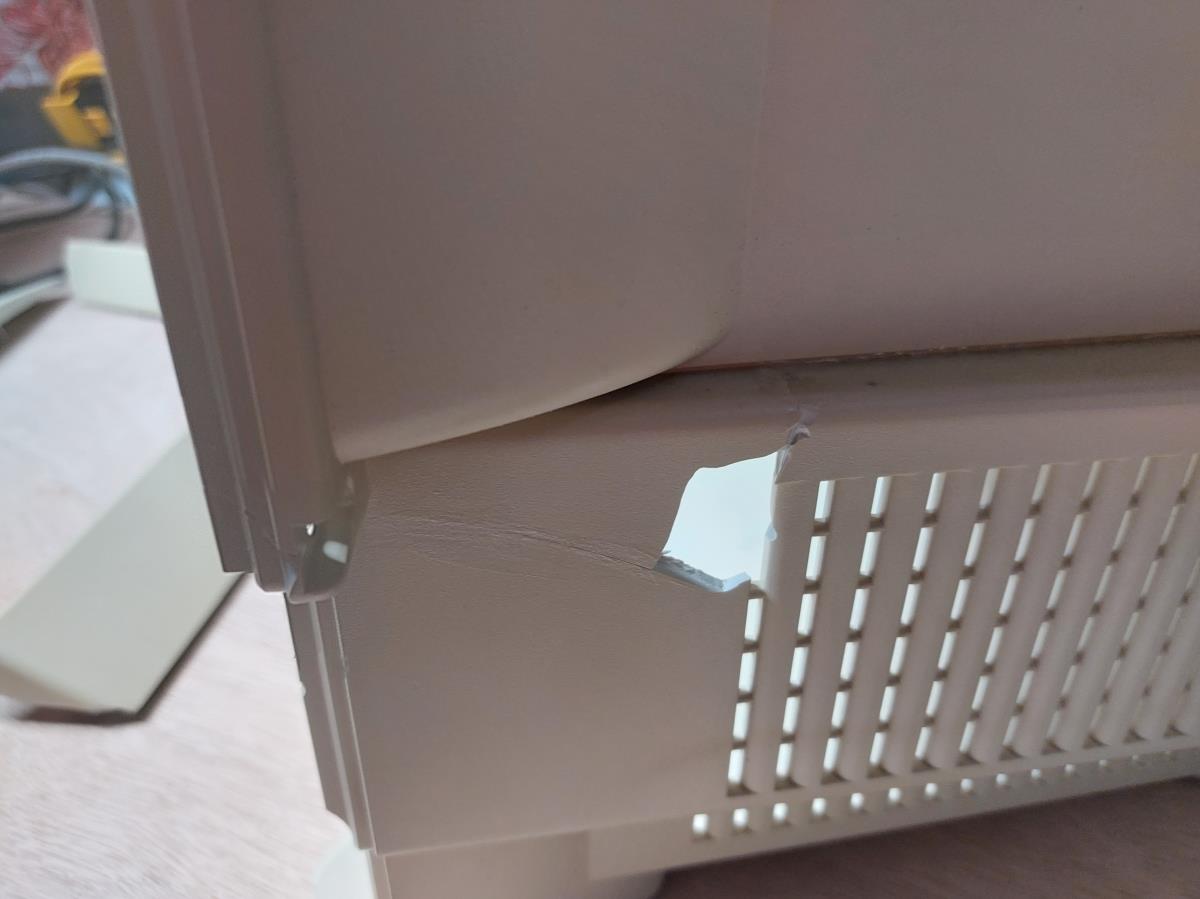 I'll readily admit that we're going to have bits that just won't fit. there's a powder at the bottom of the box made of fine plastic- I expect a fair deal of parts are damaged beyond any reasonable hope of repair. That said, we've got sheet styrene and more foam than anyone should have in one place, so filling in gaps and whatnot won't be impossible.

That said, I expect that this machine is going to be an absolute Frankenstein's monster when it's done. We'll see I suppose!

Starting to come together!