Our next show is in the works!

Saturday, October 1st, 2022 at the Portage County Stevens Point Library, the Wisconsin Computer Club will be hosting our next open house show! Table space is available to all members who want it. 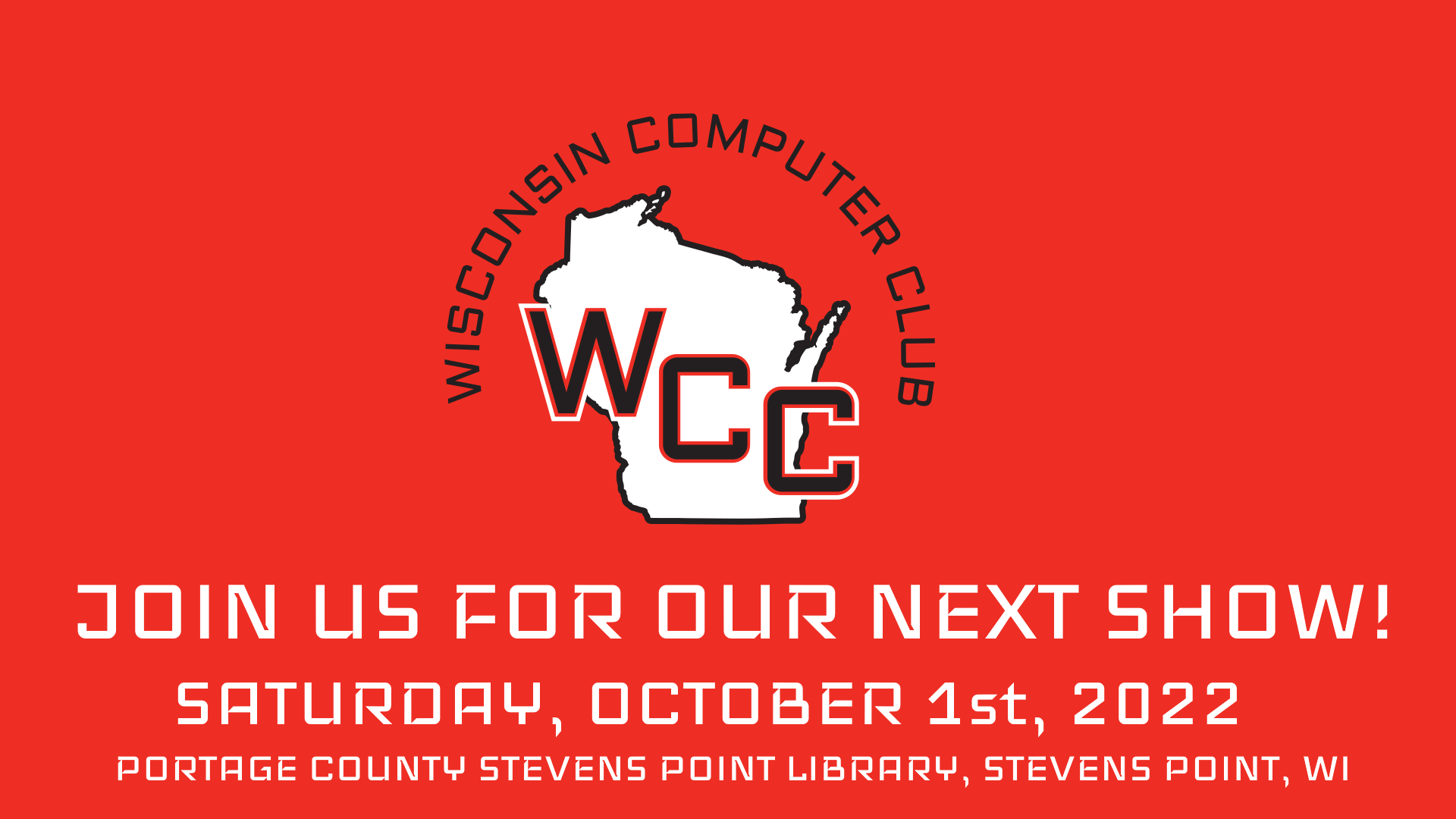 More info time! The show will run from 10AM to 4PM, with setup starting at 9AM for anyone looking to have a display in the show. If you want space, let me know in advance and I can get you table covers, signs, and other goodies.

There isn't a "theme" this time around, so bring along whatever you want to show off or work on!

It tends to be busier early on, and then more quiet after the lunch hour. If anyone has "project" machines to share or tinker with, we'll have time for that too. I'll have a couple along for sure.

If anyone has any questions, needs accommodations, or anything like that, say the word!
D

I have a moving obligation that weekend so I'm not sure how/when I will be able to attend this quarter.

DeanG said:
I have a moving obligation that weekend so I'm not sure how/when I will be able to attend this quarter.
Click to expand...

No worries. If we're able to get a time at the Idea Center, I'd be down to give your meeting proposal a go in the near future too!

I was reminded to make a Facebook event (whoops!) though I did get some posters out over the last weekend- we'll see if that affects attendance any. It sounds like we have some interested parties though!

I'll be bringing a veritable buffet of equipment to this one, with the Sega CD/Genesis combo, Amiga 1000, and Commodore 128 heading over for sure. The Aquarius, C64, and some Mac gear will likely make an appearance as well. If anyone wants to see anything in particular, shout it out and I'll see what I can do! 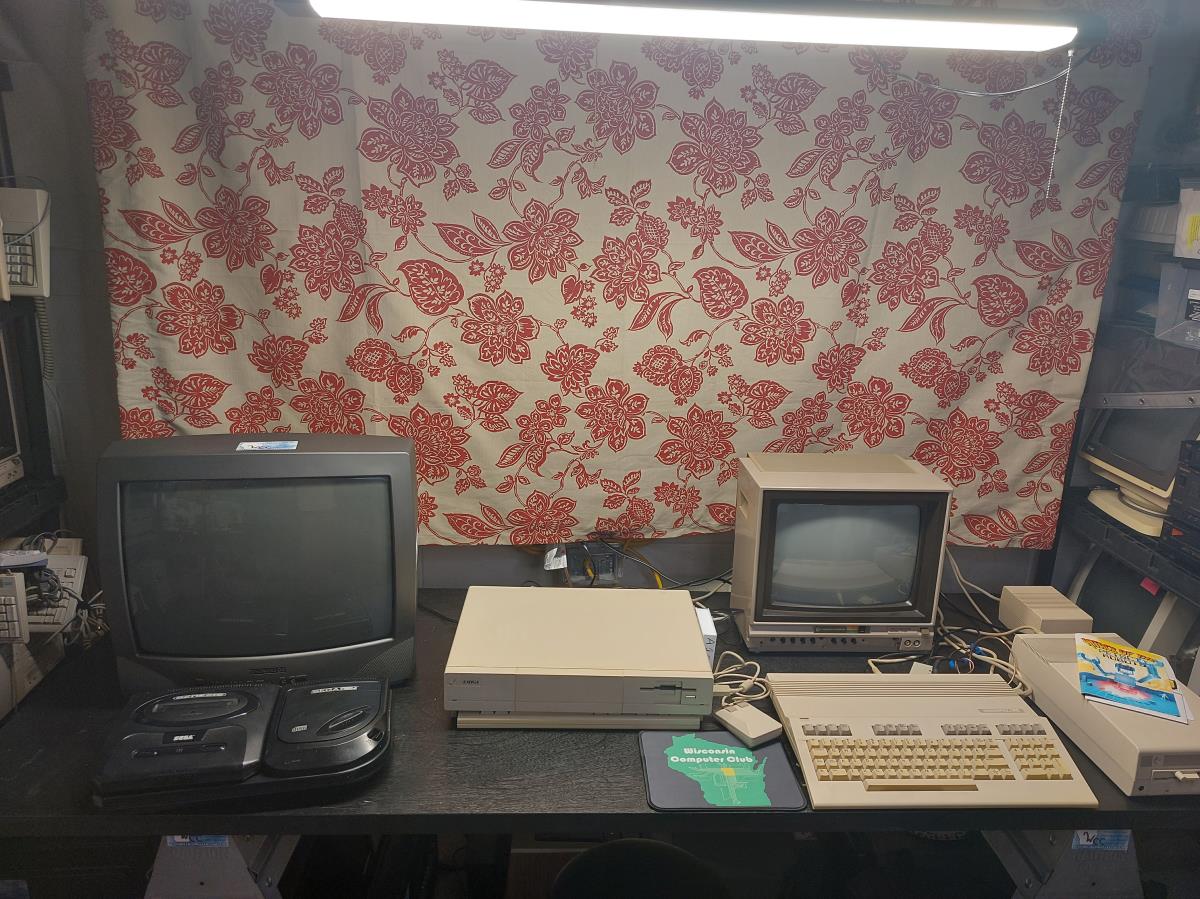 I've swapped our usual Amiga 500 out for the bulkier Amiga 1000 system as the A500's floppy drive isn't reading disks reliably, and I need at least one floppy to boot the machine. Ah well, I tend to think people like the A1000 more anyway.

We had a great time at the show! Not our busiest by any stretch (we were competing with a lot of local events and some unseasonably nice weather) but we still had a consistent stream of people in to see the displays nd play the games. It was kinda nice as we got a chance to really to talk to pretty much everyone for as long as they wanted, which was great!

I took most of my pictures very early on before anyone got there. Check it out: 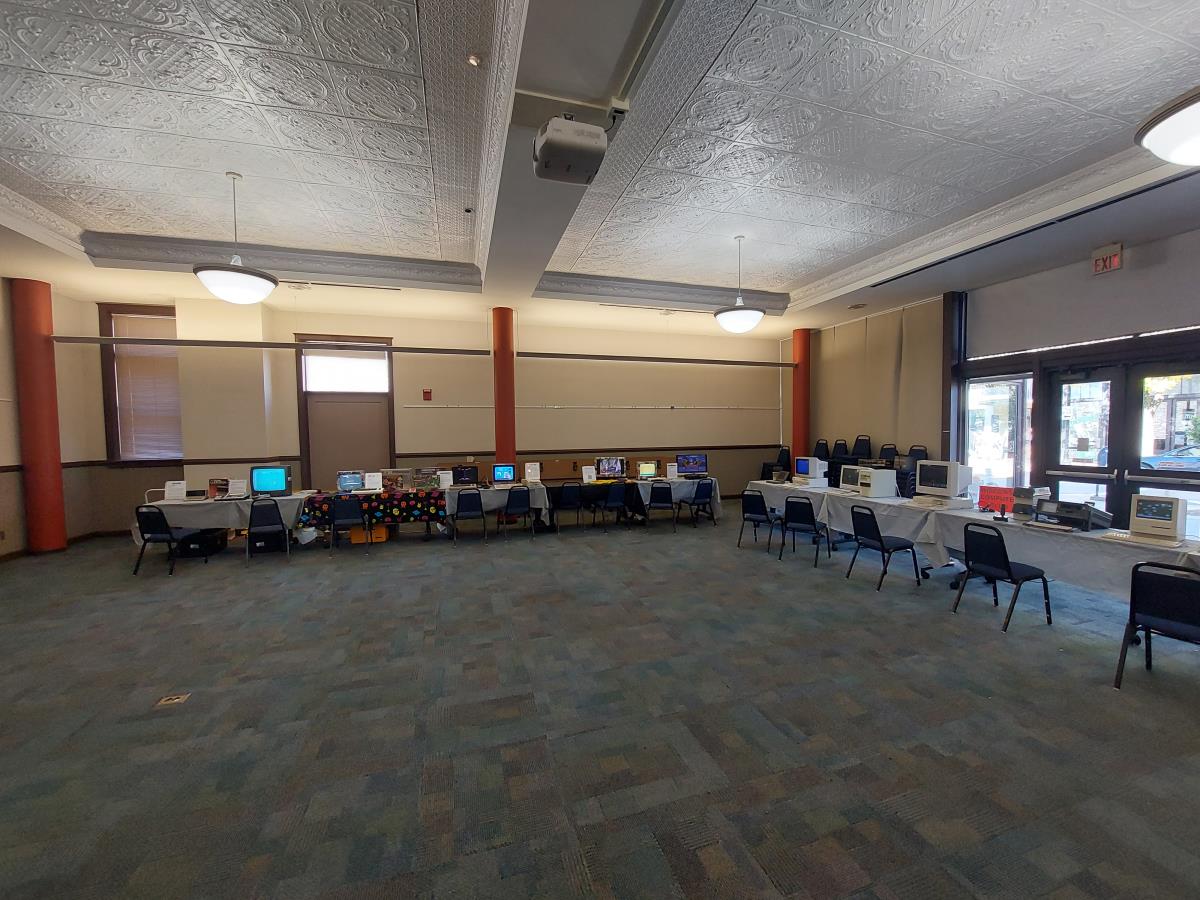 Overall look at the "Pineries" room at the library. Pretty nice space for these shows! 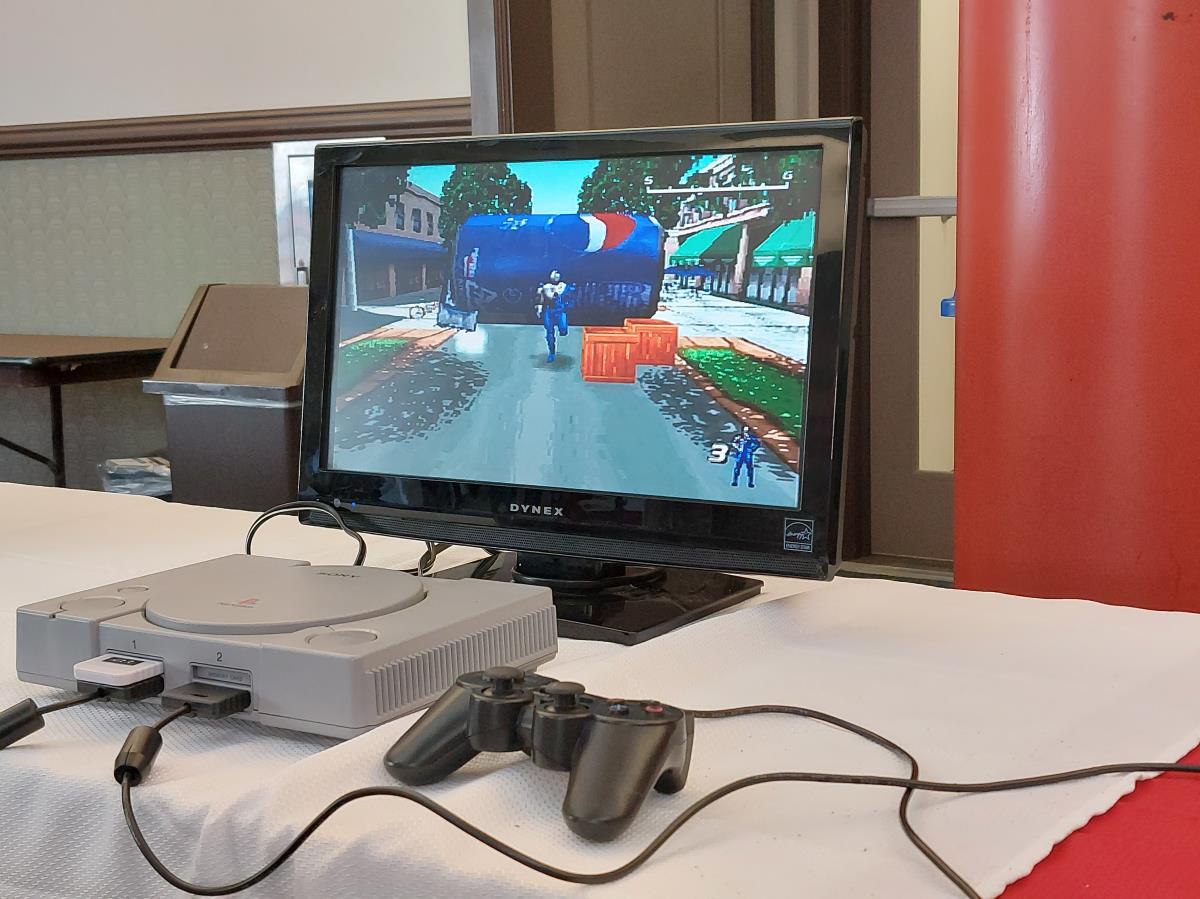 Pepsiman! All the gear for this one was still boxed up from our trip to VCFMW, so it came along to the library show too. Most people have heard of it, but few have ever played it as it was only released in Japan. 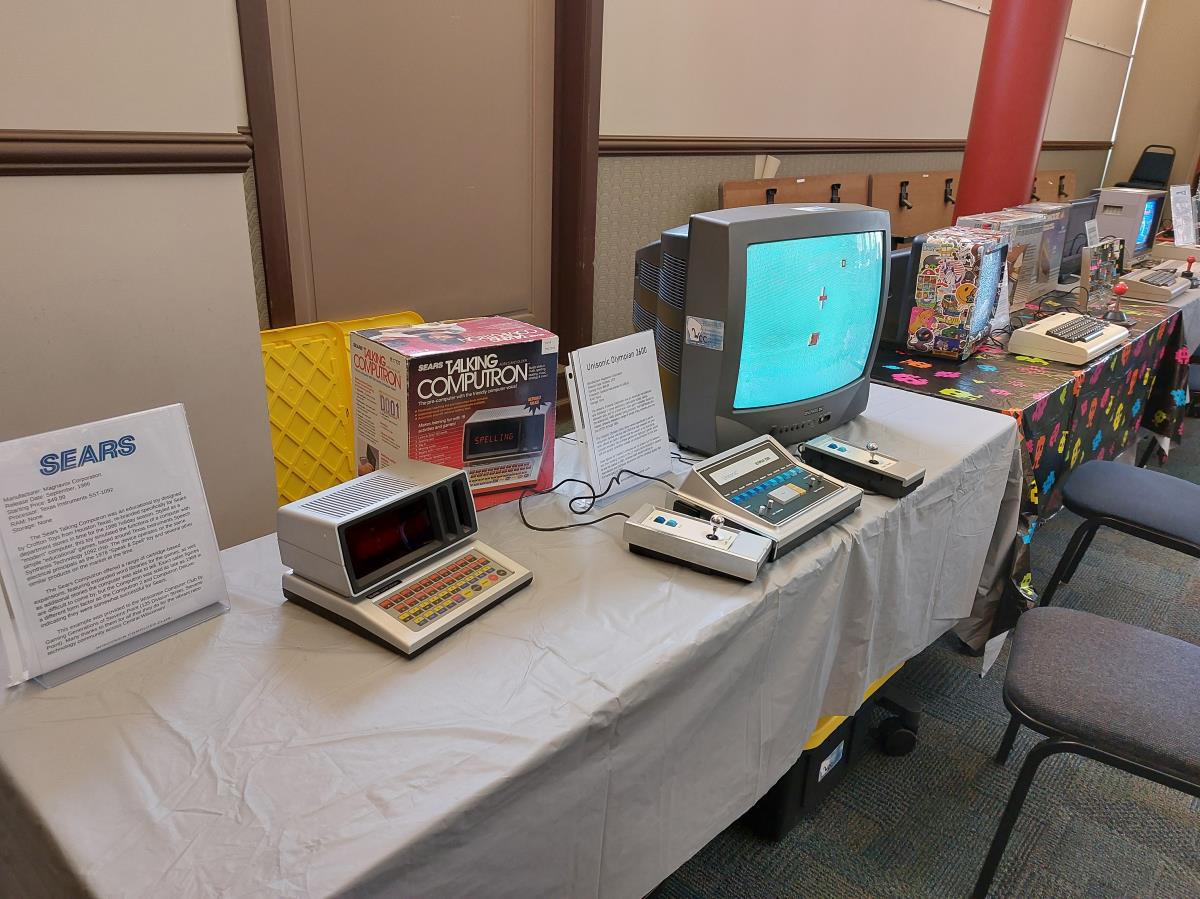 Start of the "row" of machines. From left to right, the Sears Talking Computron, Unisonic Olympian 2600, Commodore VIC-20, and Commodore 64. 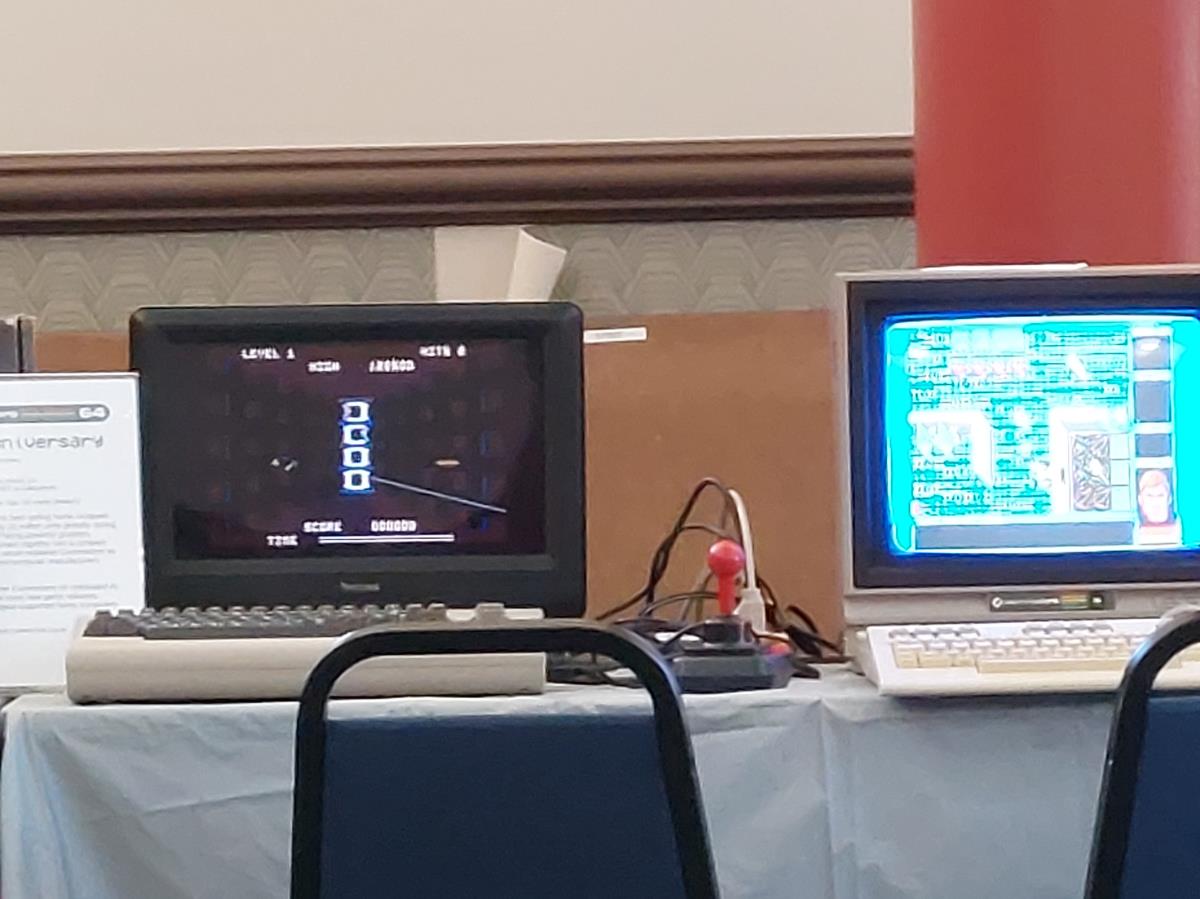 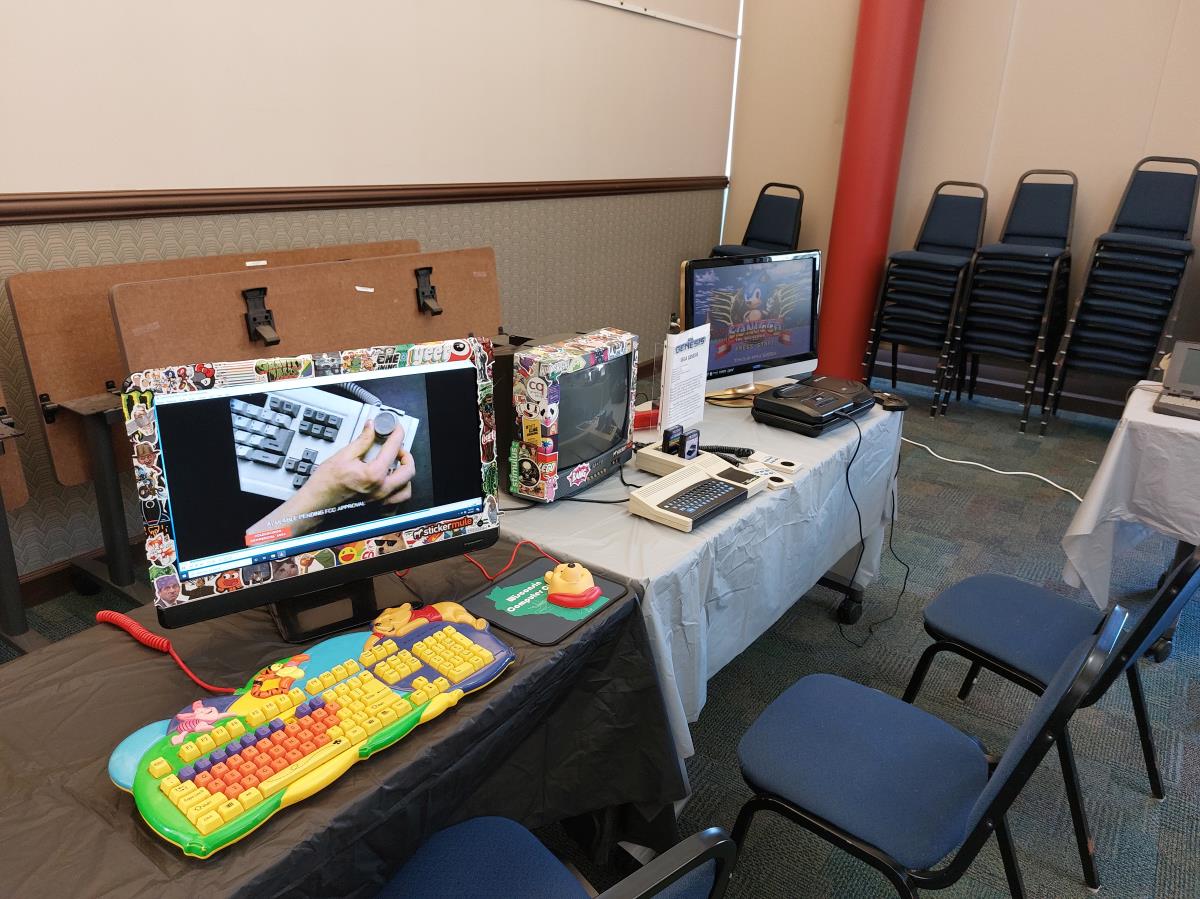 The WCC "kiosk" we took to VCFMW- I had it running old tv ads for old games and computers. Further back is the Mattel Aquarius (many thanks to @MattPilz for the controllers!) and the Sega Genesis/CD combo at the end. 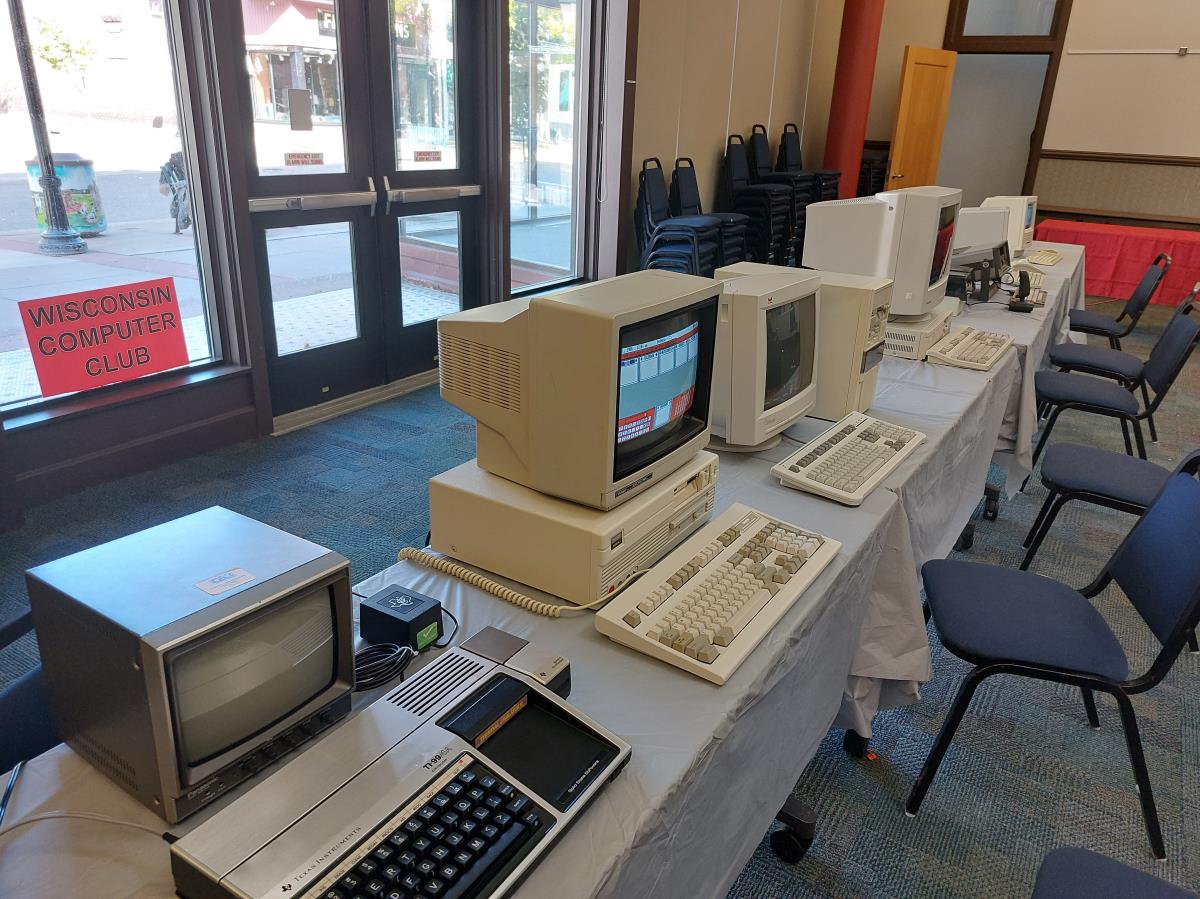 @PS2it brought an awesome display this time around, starting with a Compaq that's just out of frame, a TI-99/4A, Tandy 1000, a pair of excellent retro DOS machines, a rather rare Commodore SX-64, a Macintosh Classic and a Macintosh SE. Great games as usual too! 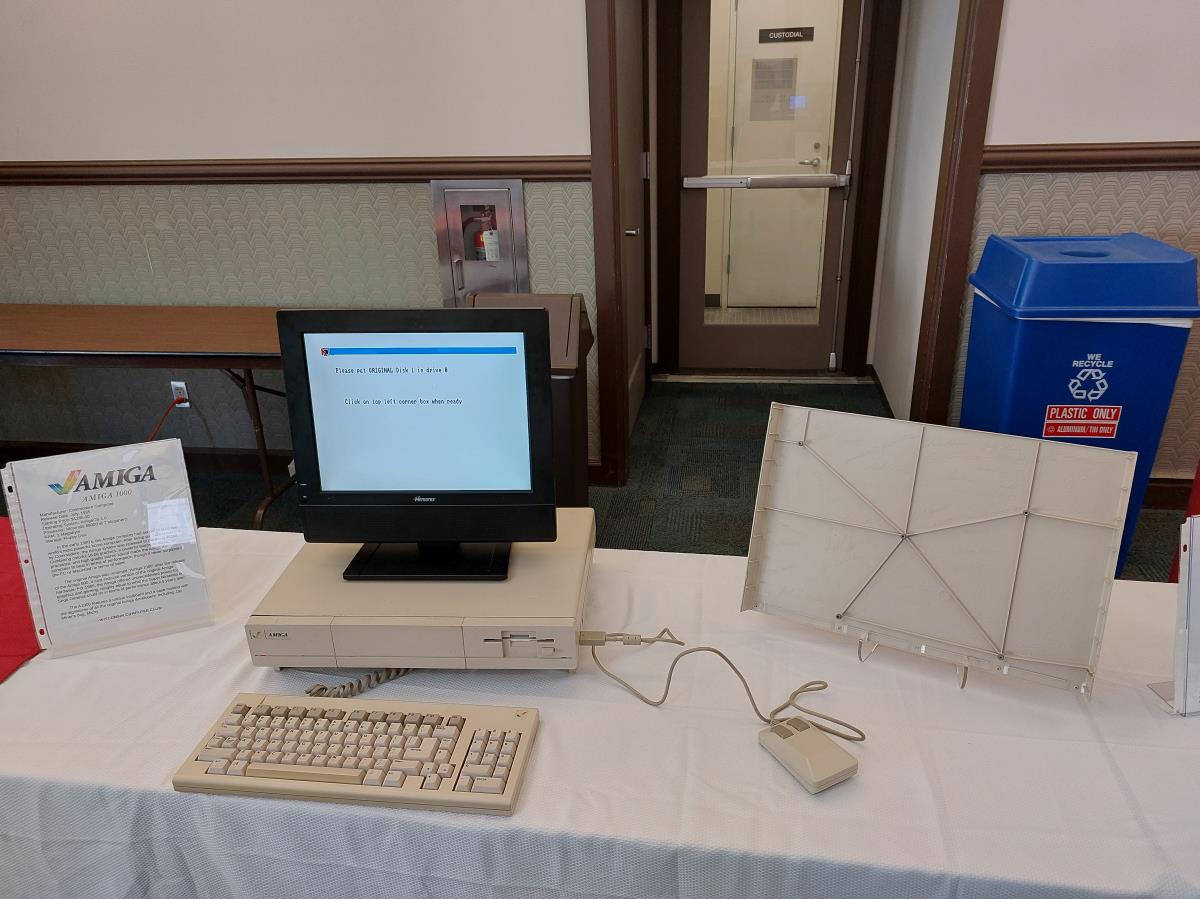 The Amiga 1000 starting up. I've got a spare case lid from a "parts" machine here in the shop I've brought along to show off all the signatures inside. 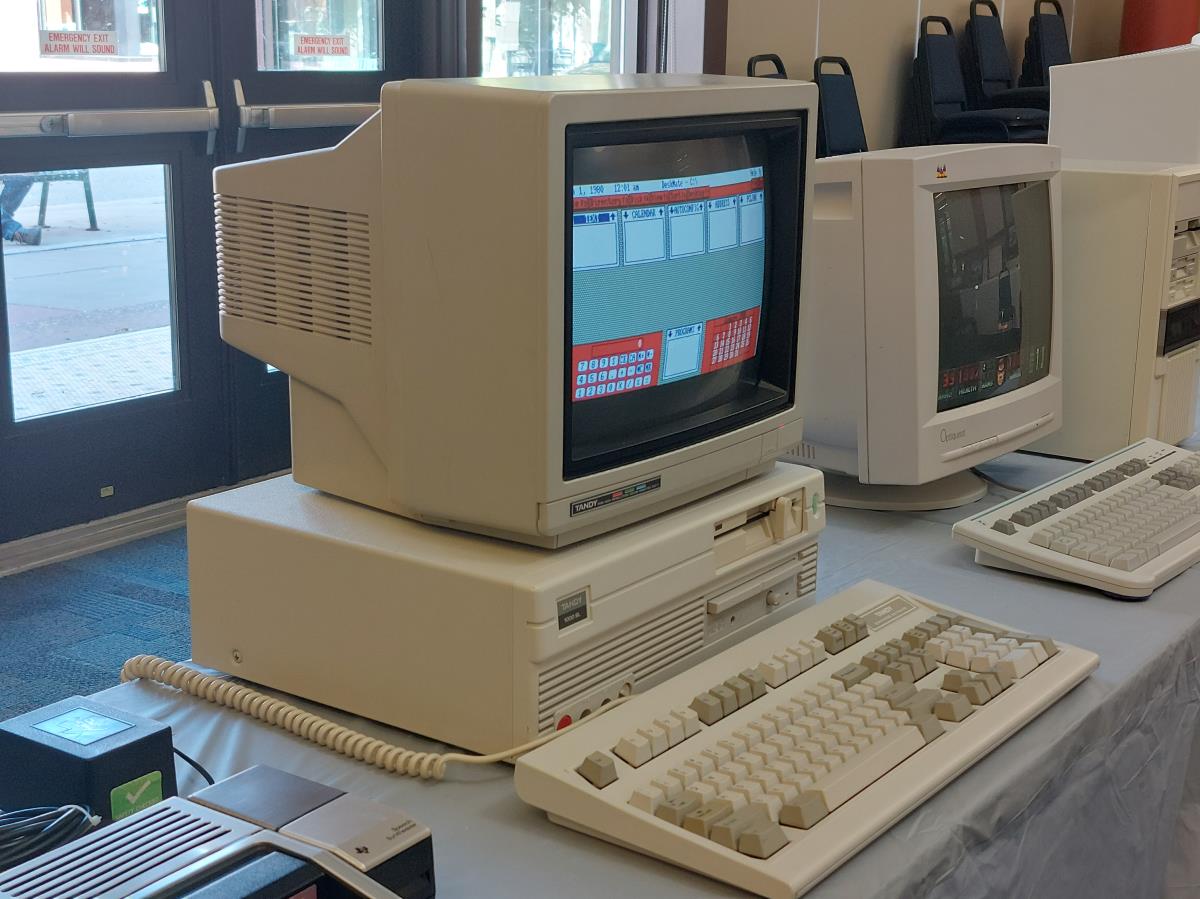 The Commodoe VIC-20! This one hadn't been working for a very long time, but then started working out of nowhere. So it came to the show! The Commodore 64 with a dysfunctional main board set up and labeled next to it. 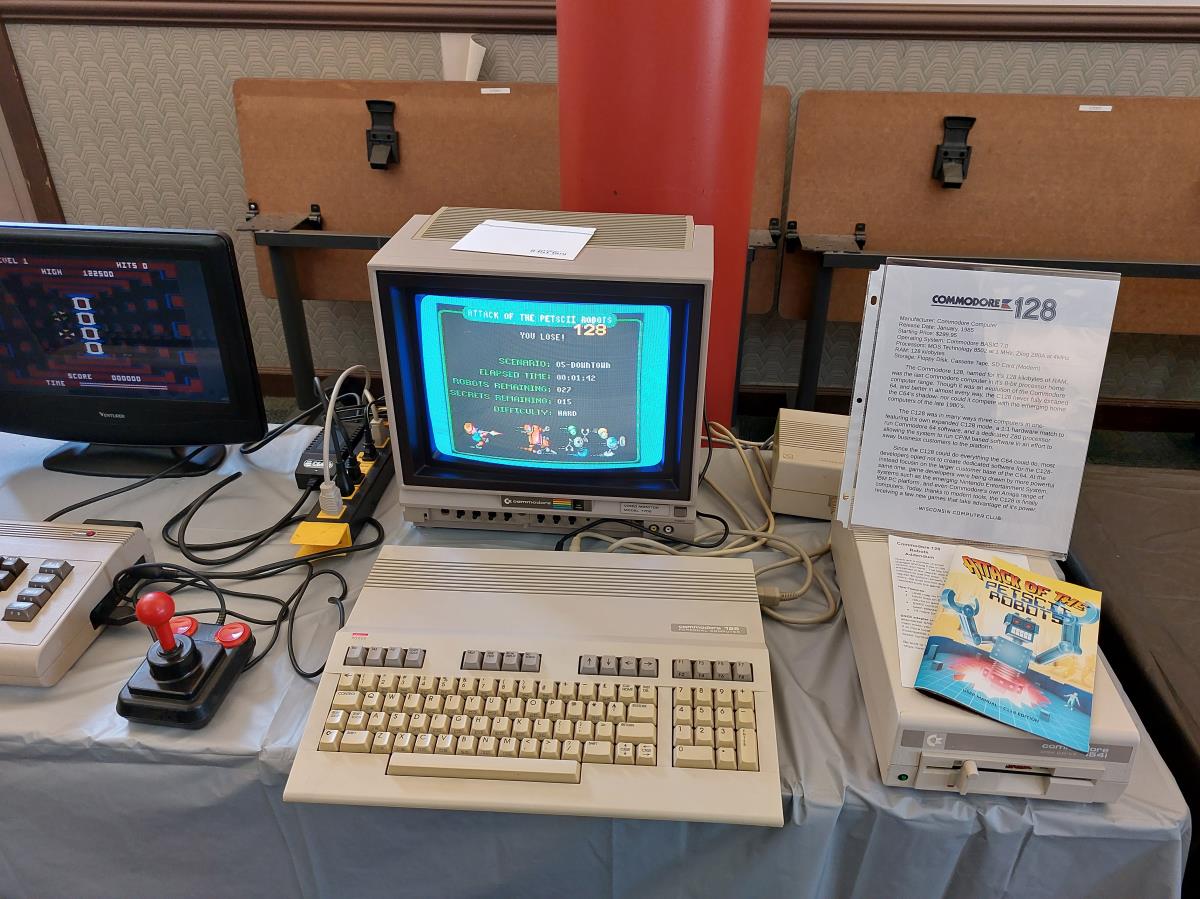 Commodore 128 running Petscii robots. We created a new "game" out of it by setting it to "hard" and seeing how long you could survive by simply running around. Usually not very long! 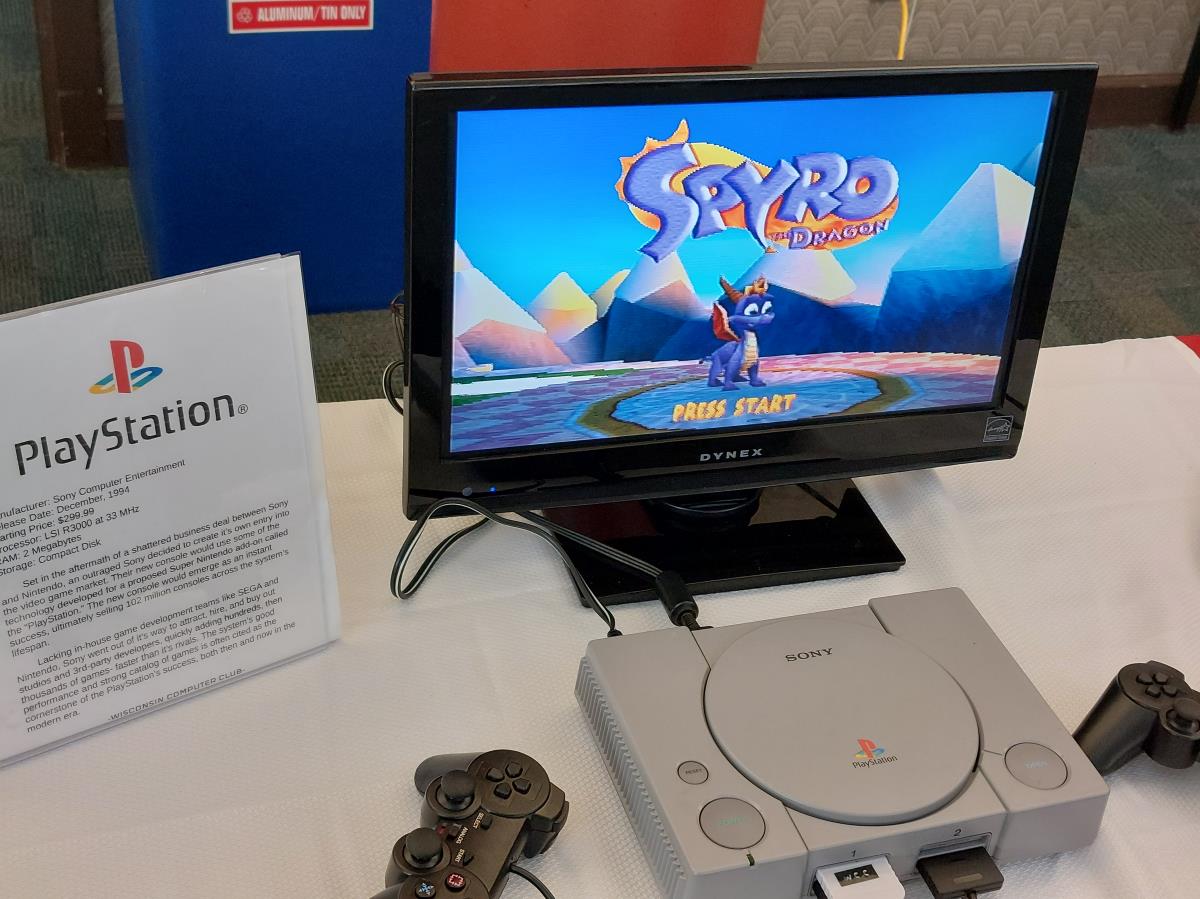 Put Spyro on later, as the Pepsiman theme song isn't quite as appealing several hours in. @DeanG found this awesome little iBook G3, and @PS2it managed to connect it to the library's WIFI network. The machine itself is a little rough around the edges, but it'll clean up nice yet I think.

Once again, an immense thank you to everyone who helped make this show a reality. They're a ton of fun, and I'm extremely grateful for all the help I've had pulling them off! On to the next one!