If anyone needs anything of me (cables, components, monitors, etc.) let me know. My shop isn't far, and I've got plenty of everything, assuming LCD's are okay. Opening day, first hour or so: I only got a few close ups of the systems I was playing with. It was really cool to see a handful of computer systems I haven’t seen before. 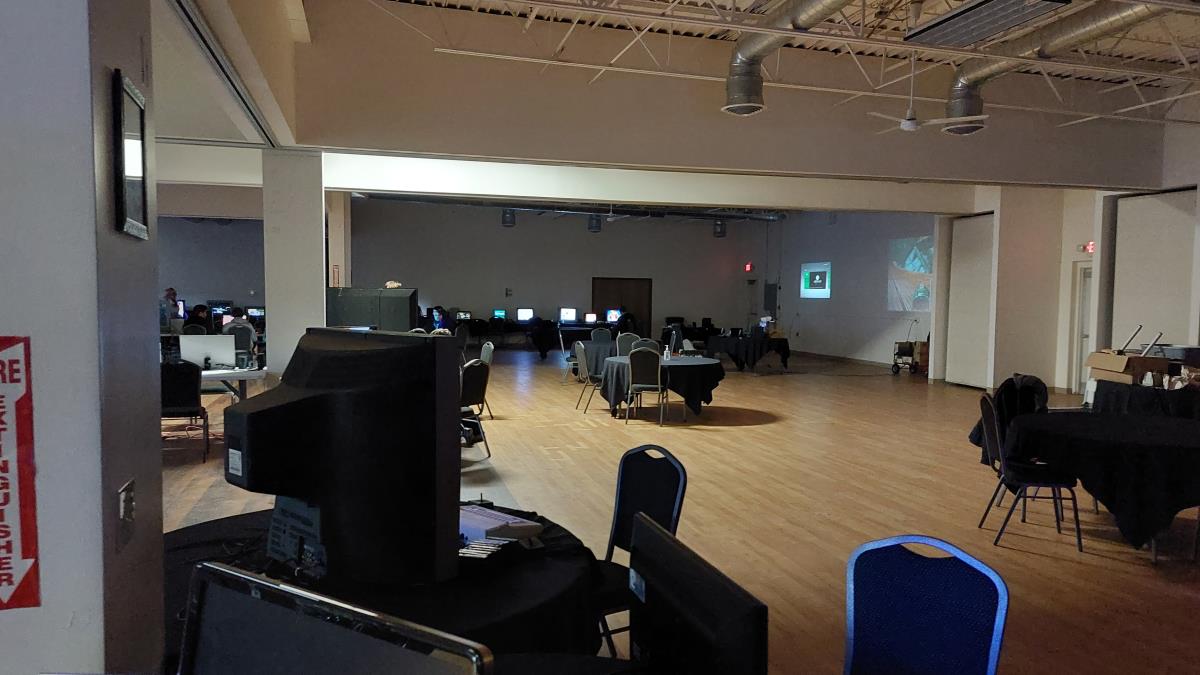 Across the hall from us. The projectors were for fighting games, racing games, and guitar hero. The lineup between the Philips CDI and the Midwest Gaming Classic booth. MGC is another convention held in Milwaukee, and they had a booth to promote their show (HERE) and sell off merchandise. They had a few unusual systems set up as well, including the following: 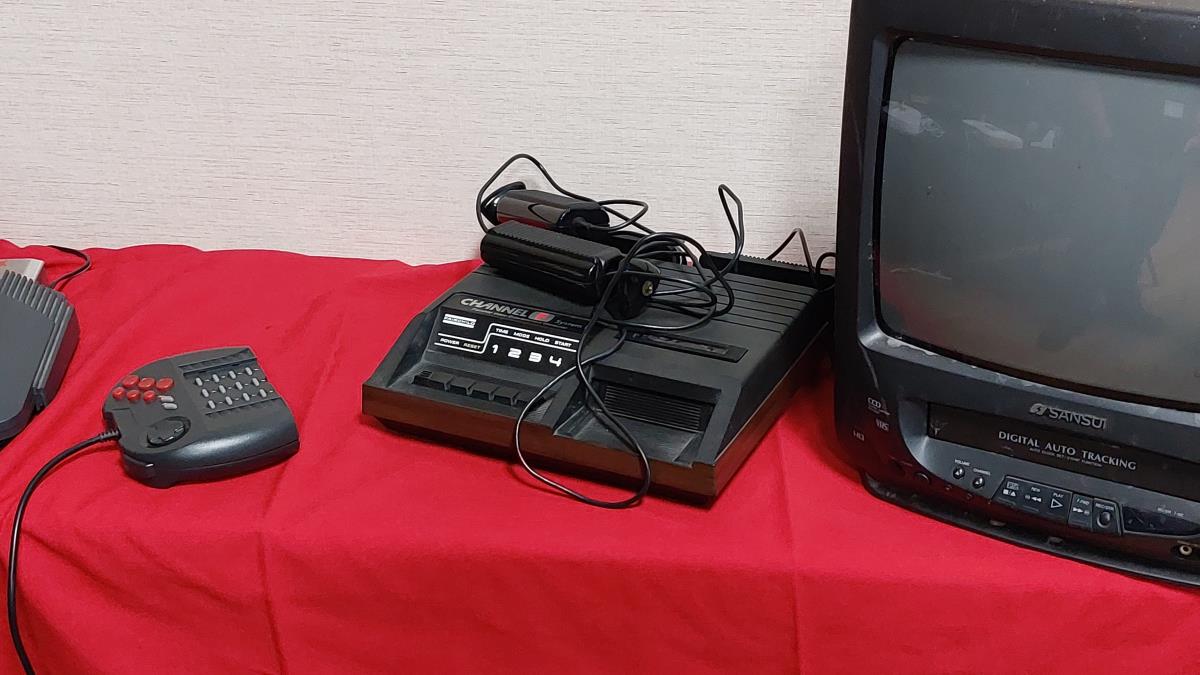 The Fairchild Channel F was the first cartridge-based videogame system. It was very cool to see one in person! Next to it was an Atari Jaguar, the last Atari console of the console wars. There was another one on the opposite side of the hall with other "unusual" machines, but this one was better lit for photos.

That was sort of the story of the show- the pictures I have don't really do it justice as my camera does not do well in poor lighting.

A Tandy Color Computer 2 hooked up to an absolute monster of a TV. Another collector brought this one to the show, and it was fun to try out some of the games on it I'd not tried before. 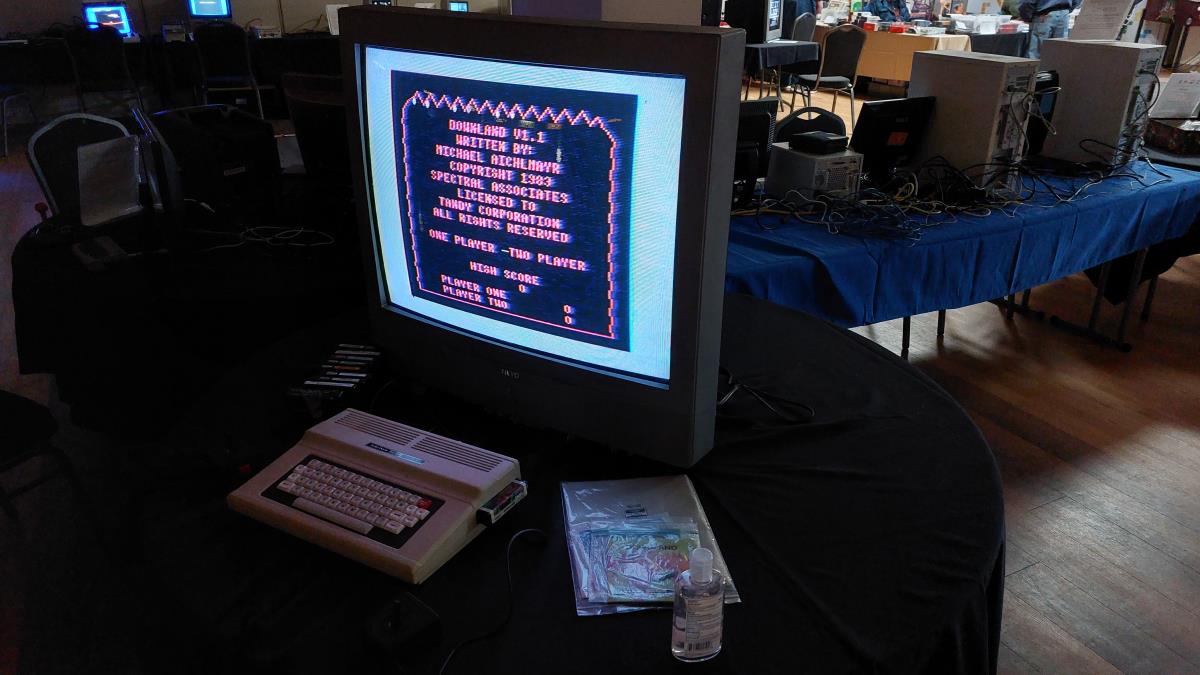 The cdi is crazy lol Another angle of the Need For Speed 3 LAN. People giving the machines a whirl! 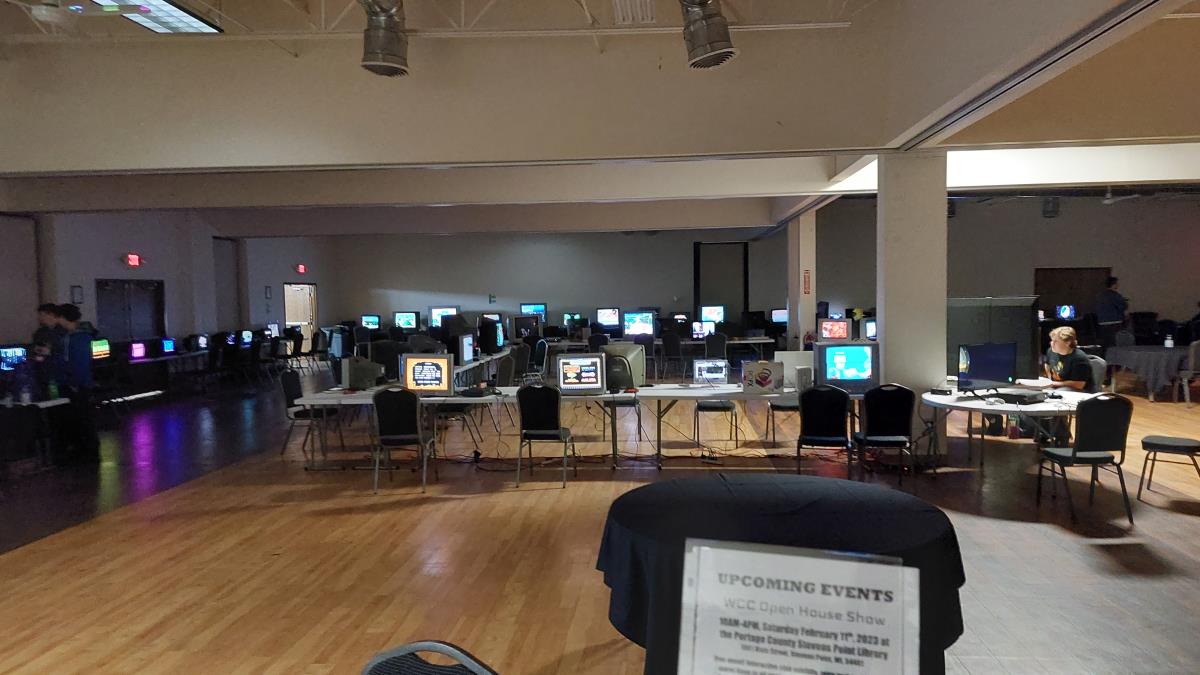 A few photos of the gear @PS2it brought to the show. 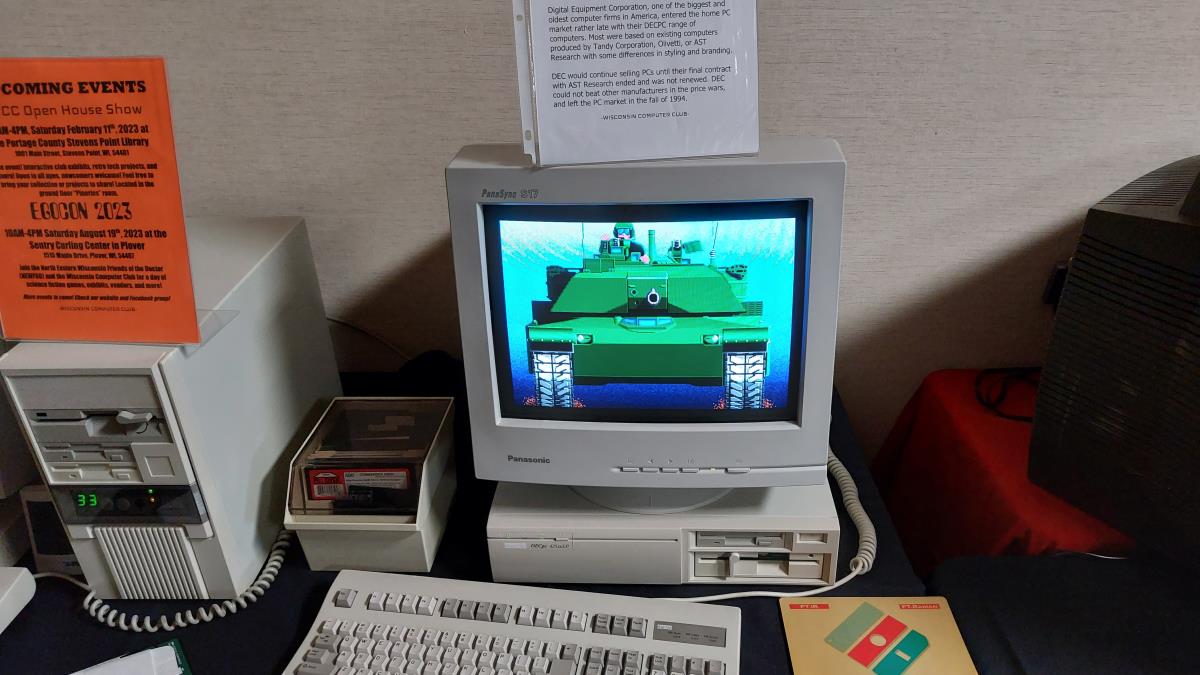 He picked up a DOS "tank combat simulator" game, and the animated loading screens were the best part in my opinion. The game is tactically very deep, but it's very text heavy- requiring you to use your imagination for the bulk of the "simulating" part of things. 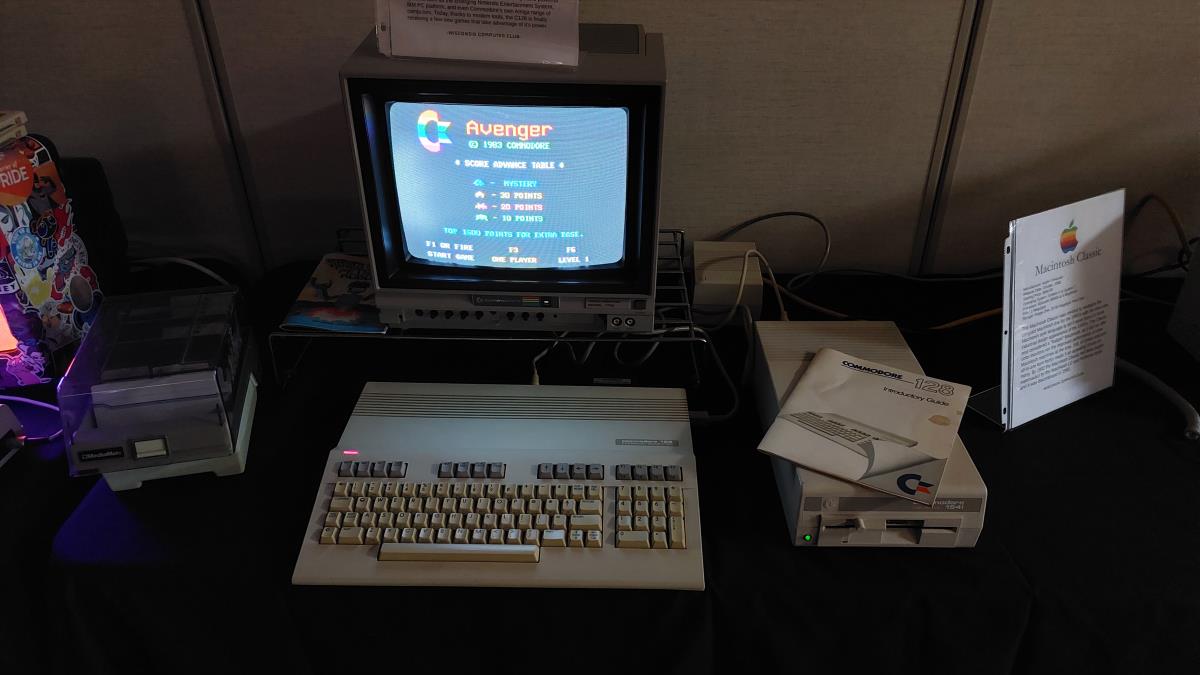 The C128, running Avenger off the cartridge. We used the disk drive too, but as most people just wanted to "try things out" running a quick and familiar arcade game seemed a safe bet. The Compudyne (hooked up to the "ultimate weapon" Pooh Bear keyboard) when it was not working properly for a moment.

On of @PS2it's Macs had a good message for the crowd during "Wheel of Fortune." 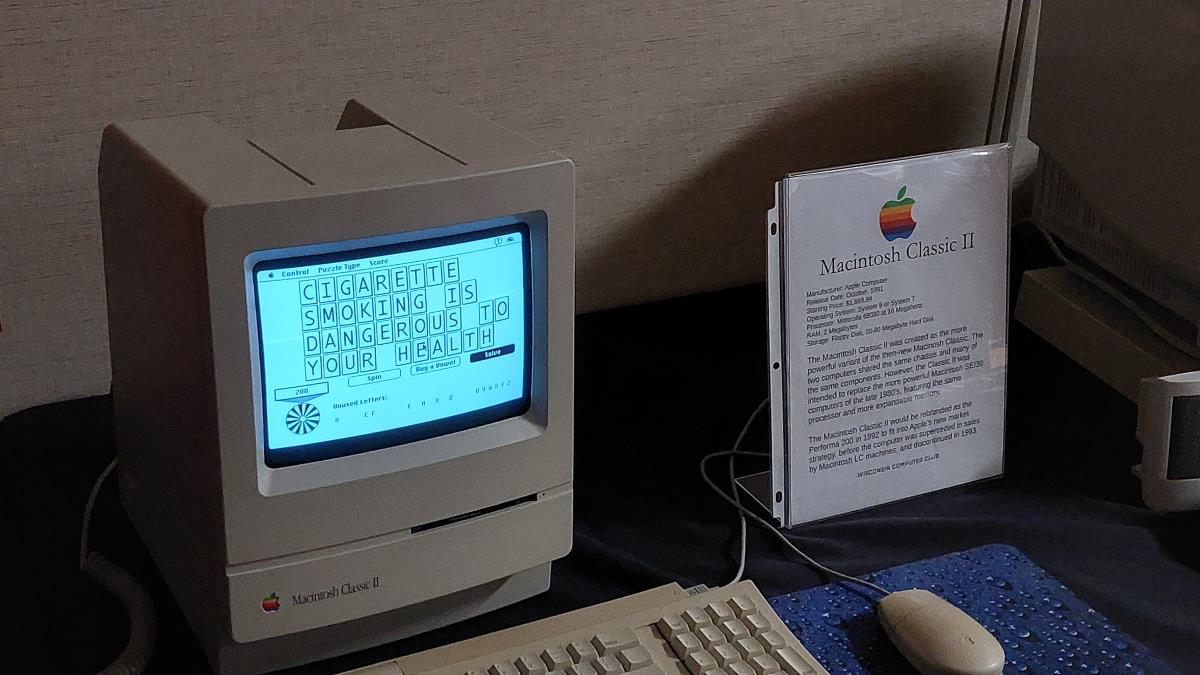 Messages left on the Apple eMate 300 and OLPC XO computer by Evercon attendees: 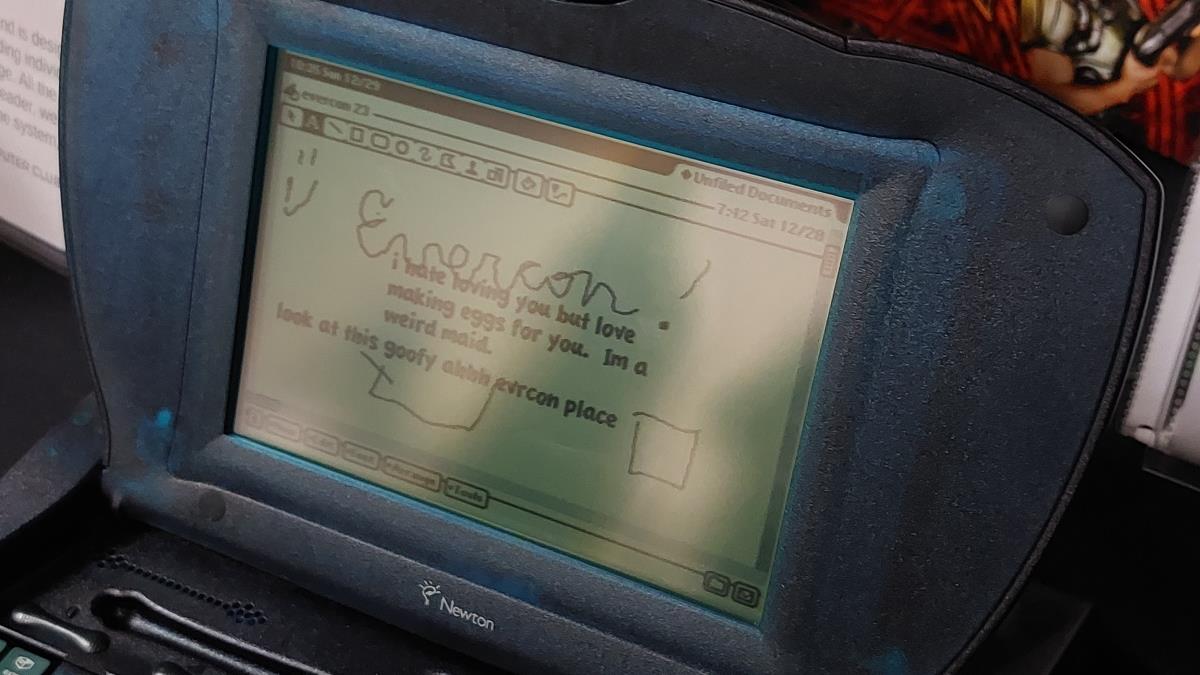 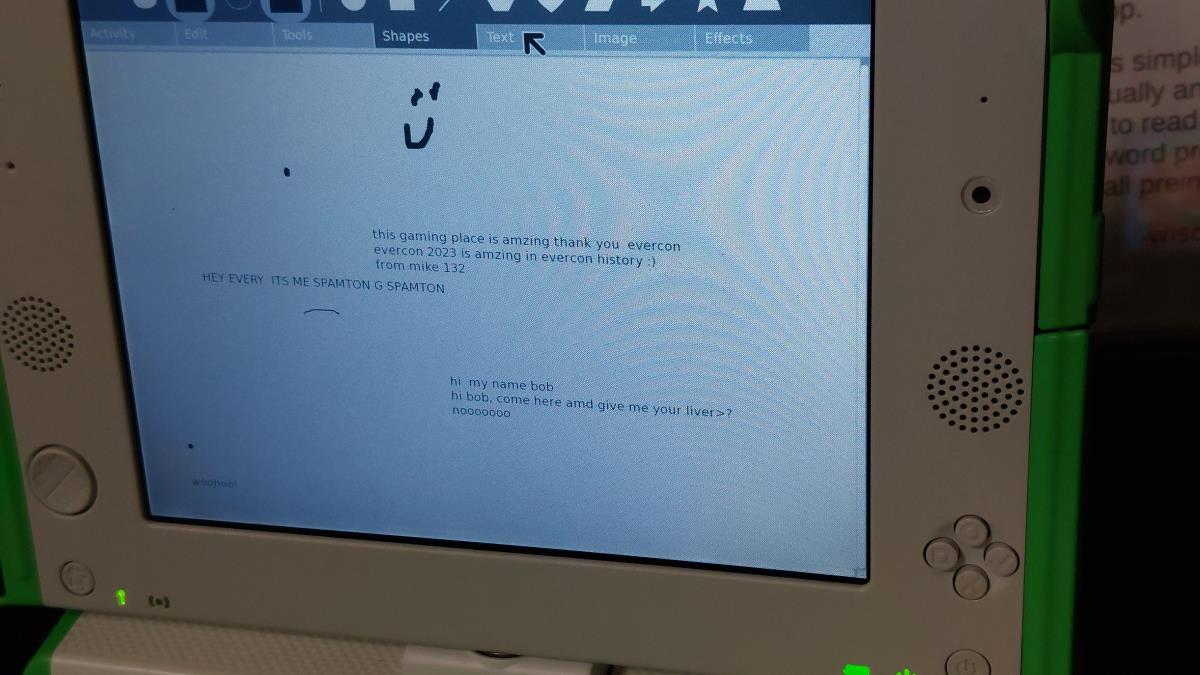 Not really relating to us, but the Laser Legion lightsaber folks had this cool thing set up in the hallway: A few pictures of things other exhibitors brought to the show that were of interest. Here's a Hudson/NEC SuperGrafx console. (Wikipedia HERE) 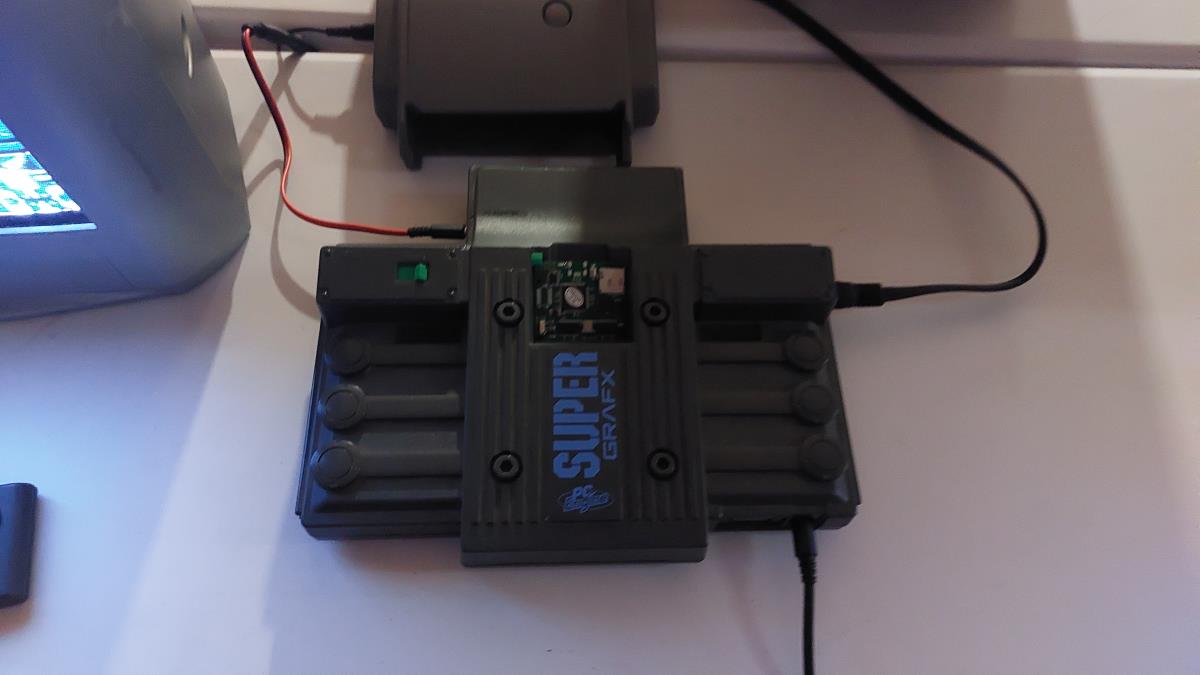 The show featured quite a few PC Engine and Turbo Grafx consoles which I spent a fair amount of time playing with. For the games I played, I can see how Hudson and NEC were able to go head to head with Nintendo and Sega in Japan. The SuperGrafx itself is one of the "bigger" consoles in the PC Engine range, and it has this odd industrial design to it that I dig! Another exhibitor's Nintendo Famicom up and running. A Sega Genesis with the "Power Base Adapter" that allowed the Genesis 1 console to play Master System games. An absolutely massive Sony TV. Though the set itself was in rough shape, the picture on it was exquisite- my camera couldn't catch it. I am glad I didn't have to carry that one around! A special collectors edition TurboGrafx 16 console dressed up for the game Legendary Axe (1989) complete with skulls, vines, and a spider with glowing eyes indicating the power is on. This thing was fabulous, and it was a treat to see it (and play around with it) at the show! They sure don't make stuff like this anymore! 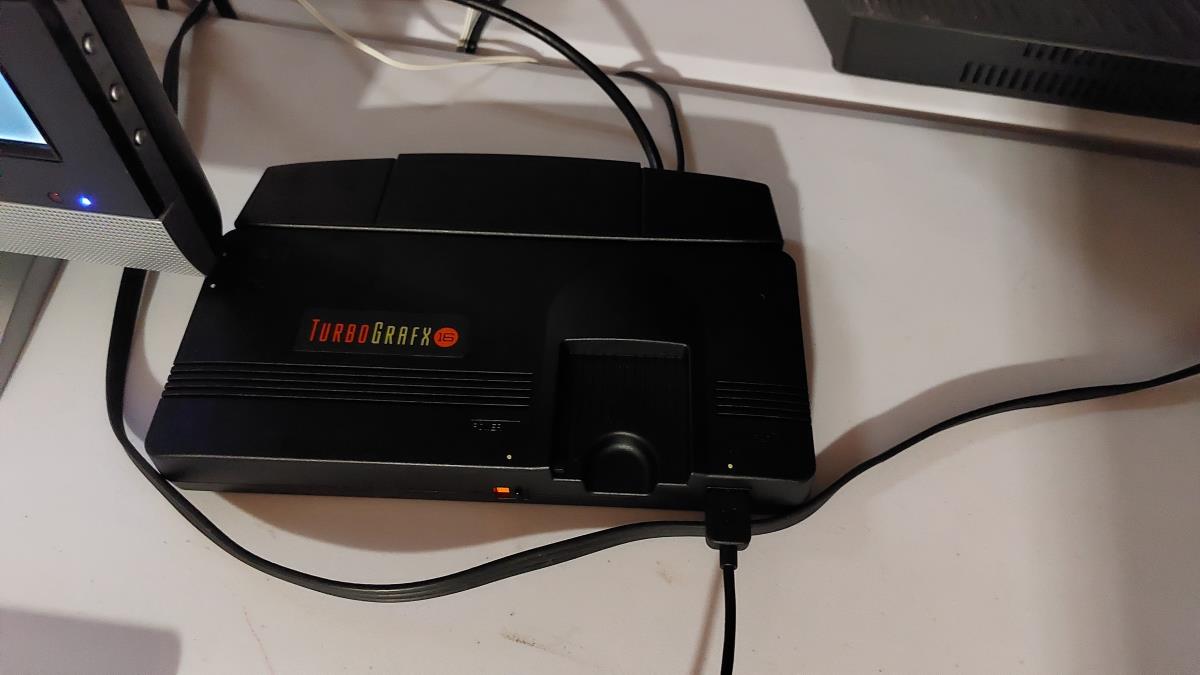